Nelda Luce Blair, a former director of The Woodlands Township and member of several Greater Houston business and community organizations, was appointed to the state Public Safety Commission by Gov. Greg Abbott in January.

Blair’s appointment to the body overseeing the Texas Department of Public Safety is for a six-year term expiring Jan. 1, 2026, according to a January statement from Gov. Abbott’s office. While Blair has yet to be approved for the role by the Texas Senate’s nominations committee, which will next meet during the 87th Texas Legislature in 2021, Blair said she will serve pending confirmation and had already begun work for the commission in Austin in February.

The gubernatorial appointment is one of several collected by Blair since she first entered local politics in the 1990s. Around south Montgomery County, Blair has held leadership positions with bodies such as the Conroe ISD Education Foundation, The Woodlands Convention and Visitors Bureau, The Woodlands Area Chamber of Commerce and The Woodlands Area Economic Development Partnership.

Blair was appointed to the five-member Public Safety Commission alongside Austin attorney Dale Wainwright, a former Texas Supreme Court justice and Harris County district court judge. The commission’s other members include chairman Steven P. Mach of Houston, A. Cynthia "Cindy" Leon of Austin and Steve H. Stodghill of Dallas, according to the DPS.

What previous interests or experiences drew you to this position?

As a lawyer for over 30 years and a former prosecutor from way back, I have long been connected with the legal system. However, this appointment is my first direct connection with the Department of Public Safety. Previous to this appointment, I was appointed by governors [Rick] Perry and Abbott to the boards of regents for University of Houston System and Stephen F. Austin State University [as well as] the Texas Economic Development Corporation.

What is the importance of the state Department of Public Safety, and what are your duties as a member of the Public Safety Commission?

The DPS covers a wide range of services and departments ensuring the safety of the public, such as criminal investigations, driver’s licenses, emergency management, highway patrol, intelligence and counterterrorism, Texas Rangers and more. As a Public Safety Commissioner I will serve on a five-person commission with the responsibility to oversee all aspects of the DPS.

What are your personal goals as a member of the Public Safety Commission? Are there any particular local or statewide issues you hope to address as a commission member?

Having just been appointed by Gov. Greg Abbott in January, I underwent a daylong orientation, then attended my first meetings in mid-February. During my six-year term on the commission my overriding goal will be to create and oversee policy that will best ensure the protection and safety of Texas citizens. A major challenge is the exponential population growth experienced by our state, so we will work to address the issue of providing an ever-increasing number of citizens with courtesy, service and protection, the DPS motto. That will be a main focus for every aspect of DPS, from preventing and investigating crime to the line at the driver’s license office, and everything in between. 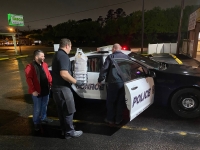