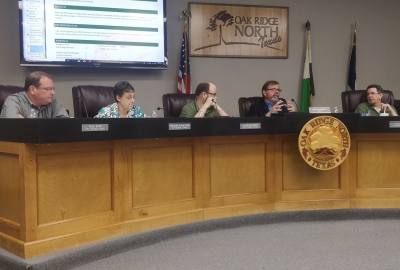 “We have a solid, financially sound city … I can tell you now that we are better now than we have ever been,” he said. “We have come a long way from a time of turmoil in the past where we not only changed the mayor and council, but we absolutely changed the way that this city did business.”

He also credited the Oak Ridge North’s improved financial status, civic planning and ongoing development, before announcing his plans to step down at the June 10 City Council meeting. Kuykendall will be succeeded by Mayor Pro Tem Paul Bond, who will be sworn in at the June meeting.

"Now is the time for this change," Kuykendall said. "Being the mayor has been a privilege and a blessing for me."

• After Kuykendall’s speech, the council approved an increase of $27,412 to its annual budget for additional costs related to the renovation of the Marilyn Edgar Park pool and the purchase of new technology. Both items had been previously approved by council but exceeded the previously budgeted costs.

• Council also approved a development grant request of up to $8,000 to replat a property at 27800 I-45 N. The move will allow CH Realty VI/R Houston Wood Ridge Pad Site L.P. to tear down and rebuild on an expanded property, located on the corner of Woodson Road the northbound I-45 frontage road. The company plans to construct a new restaurant, which is expected to open in 2020.

• City Council then awarded a contract of up to $8,000 to Gulf Coast Fence Co. for the construction of a wrought iron fence and swinging gates at the entrance to Teddy Bear Park on Robinson Road. Gulf Coast’s estimated project cost of $6,000 was the lowest of three bids submitted to the city, to which the council added an additional contingency of $2,000.

• Two other city development tasks were approved to be advertised for bids. The first, Phase 2 of the city’s I-45 waterline expansion, would result in the construction of a 12-inch waterline from the southwest corner of the property at 27000 I-45 N. north to Paula Lane and an 8-inch waterline from I-45 east down Paula Lane. City Public Works Director Joe Sherwin said the second initiative, Phase 9 of the city’s sewer system renovation through a Texas Water Development Board grant, would center on a pipe bursting project beneath Robinson Road to remove a hump in street.

"It should be fairly straightforward," Sherwin said. "We’re going to do the Robinson Road crosspiece first, and then head south for whatever we can get done."

The council unanimously approved both projects to be advertised for construction.

• The council also directed the city planning and zoning commission to reevaluate its regulations on the dimensions of detached structures on properties within the city, which some council members said were unreasonable for larger pieces of land.

"It makes sense to have restrictions and limits and all that," council member Alex Jones said. "What we’re just saying is it should match the property size in some way."