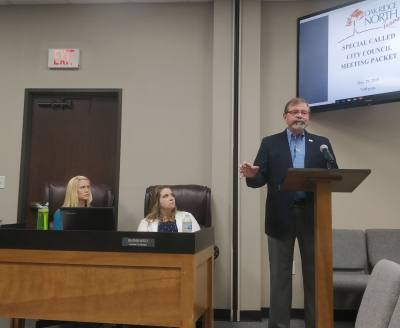 Oak Ridge North Mayor Jim Kuykendall, right, announced he will step down in June during his May 29 State of the City address.

Oak Ridge North Mayor Jim Kuykendall announced his plans to retire in June during his State of the City address on May 29.

“It’s a great time for the City of Oak Ridge North,” Kuykendall said Wednesday night, crediting the leadership of his city council and staff members. “I can guarantee that these people have nothing but the best interests of the city, citizens of Oak Ridge North at heart. We have changed and made great strides because of this great leadership and I am very proud to be a part of this group of leaders.”

Kuykendall said he will step down during the June 10 regular council meeting. City council member and mayor pro tem Paul Bond will succeed Kuykendall, who said he had spent months planning for Bond to take his place.

“He’s been taking on more activities and proven himself to be more than capable of doing the job. He’s a proven conservative, watches the budget and he also hates high taxes,” Kuykendall said.

The new mayor and remaining council members will choose a replacement to fill Bond's council seat once he assumes his new role.

Kuykendall said he felt the time was right to move on from the mayoral position given the annual civic budget planning beginning in June, and the fulfillment of many of his objectives for the city from throughout his term. Kuykendall said he is pleased with the state of the Oak Ridge North's finances, economy and the expected start to long-awaited Robinson Road improvement projects.

"We’ve proven everything we wanted to prove, that we can run a fiscally conservative city with good transparency successfully," he said. "The capstone was the Robinson Road issue, that’s working toward resolution, there’s a definite light at the end of the tunnel ... I feel very satisfied with everything. Where we are right now, we are in a good place.”

He also said he is encouraged by the city's leadership and community involvement as Oak Ridge North continues to capitalize on its economic opportunities.

“It’s time for this council to even look farther toward the future, time for economic development," Kuykendall said. "We’ve got a new city manager, we’ve got younger council people on there, we’ve got involvement in our community center of citizens which is something we’ve really pushed to have. That’s part of the great place here, that we’ve got a great system in place for people to be involved in our community and to lead this city forward.”

Kuykendall said he will be moving to Conroe after he steps down as mayor, but hopes to still be a resource for the city in the future.

"I’m going to wait to see what happens, see what comes up," he said. "I’ll never say no to helping the community out one way or the other."
SHARE THIS STORY