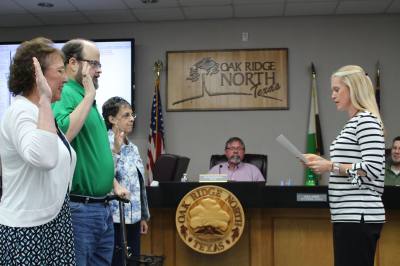 Oak Ridge North City Council swore in three of its sitting members for their new terms at its May 13 regular meeting before hearing progress reports on several developing infrastructure projects around the city.

Council Members Clint McClaren, Dawn Candy and Frances Planchard all reaffirmed their oaths of office at the Monday evening meeting. McClaren, Candy and Planchard fill positions 2, 4 and 5 on the council, respectively, and retained their seats following the cancellation of Oak Ridge North’s May election due to the three candidates running unopposed. The returning council members will now serve until spring 2021, while the seats of Council Members Paul Bond and Alex Jones and Mayor Jim Kuykendall will be contested in 2020.

The council also unanimously re-elected Bond as the city mayor pro tem, officially filling its positions for the coming year.

After the swearing-in ceremony, city Public Works Director Joe Sherwin provided updates on several projects around Oak Ridge North. Sherwin said planning is complete for both the city’s Texas Water Development Board grant project, which will fix a piping problem area beneath the Robinson Road and Maplewood Drive intersection, and its I-45 water line project, which will construct a new water line from Robinson Road to Paula Lane between the residential and commercial zones there. With the completion of both designs, Sherwin said he will bring an action item before council at its next meeting to begin the process of advertising the projects.

Sherwin also said progress is being made on the city’s five right of way acquisitions along Robinson Road that are needed for Montgomery County Precinct 3 to begin working on the redesign of the I-45 crossing between Robinson and Woodlands Parkway. Precinct 3 is in the process of completing its $6.8 million widening of Woodlands Parkway across the interstate and will move on to the interchange redesign once Oak Ridge North completes the acquisitions.

Sherwin then announced several two- to three-night blocks for mosquito spraying around the city between May and October. Planchard requested the first stretch, scheduled for May 24-26, be moved up following Precinct 3’s alert that a local mosquito recently tested positive for West Nile virus.

The council also approved the final signage design for the new offices of Strickland Dental on May 13, in another step toward opening the first business within the city’s Robinson Commercial District. The council first approved a development agreement with Strickland in March, which included broad building and signage standards meant to serve as a template for the zoning district on the south side of Robinson between Westwood and Maplewood drives. Strickland’s updated placard proposal passed with a 4-1 vote, pending the reduction of lettering council members said violated the city’s requirements for sign dimensions in the Robinson zone. While a matter of inches for the Strickland sign, council mandated the redesign to set a standard for future businesses in the zoning district that it hopes to maintain as a visually blended commercial and residential area.

Following the regular meeting, council adjourned to executive session, when it discussed the Robinson Road right of way acquisitions. Council returned and unanimously approved the purchase of two of the five Robinson Road parcels for a total of $84,861.10.
SHARE THIS STORY

I Heart Mac & Cheese is anticipated to open late summer to early fall.

Founder and owner Terry McBurney opened the first location of Republic Grille seven years ago because he wanted to provide a truly local restaurant to The Woodlands community, he said.

Area hospitals are attempting to fill positions created by a nursing shortage that began before the pandemic.

The new road would extend Woodtrace Boulevard from Hwy. 249 to FM 2978.

Since June 1, coronavirus vaccine distribution across Montgomery County has shifted from a hub-based model to one centered around physicians and clinics as demand begins to decrease.