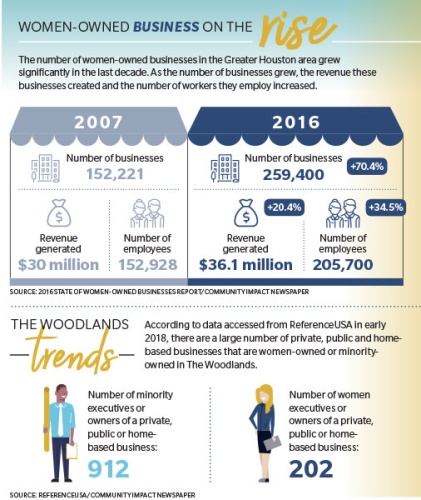 Significant economic growth in The Woodlands area in recent years has led to more diversity among business owners, with more minority- and women-owned businesses becoming a larger part of the local business scene.

According to data from database ReferenceUSA, which is used by The Woodlands Area Economic Development Partnership, there are more than 200 women-owned businesses in The Woodlands area while over 900 businesses are owned by minorities.

J.J. Hollie, president of The Woodlands Area Chamber of Commerce, said he believes the rise in women-owned and minority-owned businesses is due to the growing diversity and local resources available in The Woodlands area.

“The Houston region is one of the most diverse metropolitan areas in the country,” Hollie said. “The Woodlands should and does reflect that. If you go to the mall here, you’ll hear people talking in Spanish and Cantonese. It’s a great strength to our community.”

Hollie said when looking at the chamber’s recent membership numbers, the organization recently had about 20 new businesses join, and more than half were women-owned businesses in the area. Many were owned by Hispanics and African-Americans.

“It’s amazing and encouraging to see,” Hollie said. “I think it’s a social trend. Women are taking advantage of the economic opportunity here.”

“We’re open to doing businesses with everyone here,” Hollie said. “We have a ton of resources for small-business owners and also consider ourselves a small business resource. We advocate for every single business in our area.”

Alana Valentine, a franchise owner of Pinot’s Palette in The Woodlands since 2013, said the area’s multicultural business community and access to helpful organizations made her feel welcome as a black, female business owner.

“The community has embraced me,” Valentine said. “One thing we need to do is be more encouraging to women business owners and have more partnerships with one another. We have more networking groups now, and men are also more open to supporting women-owned businesses.”

Valentine said being involved in local organizations, such as Women of The Woodlands—a local group that invites professional women to connect with one another—and The Woodlands Area Chamber of Commerce, has grown her network by helping her make connections as a small business owner and learn more from fellow business owners.

Maria Pimienta, another minority business owner in The Woodlands, said since opening VomFASS in Hughes Landing in late 2016, she has also had a great experience with the local community.

“I’ve been in The Woodlands for 29 years, so it is like a hometown,” said Pimienta, who is originally from Mexico City. “I think The Woodlands has grown immensely since then, and it is very family-oriented. Women are able to own a business and also run a family. And I think there is still room to grow a lot more.”

Pimienta said by participating in events held by The Woodlands Area Chamber of Commerce, like Taste of the Town, she has successfully gotten the word out about her business and has become a part of the business community.

“I would tell other women and minority business owners to persevere,” she said. “It takes time to start a business.”

Imran Syed and Muhammed Rasheed have owned Sitar Cuisine of India since 1999 and said the business has thrived for the past 19 years due to the local community.

“It has been a really good experience because people are always looking to try new things,” Syed said. “It’s also not just about the food; people want to know about India and our culture. It’s nice to see that, and I’ve definitely seen more diversity here over the years.”

Many business owners in the area believe minority-owned and women-owned businesses are on the rise. Dana Pritchard, owner of Woodlands Suspension and Performance since 2003, said while female auto repair shop owners tend to be rare in an industry that is mostly male-dominated, she said she has had a good experience with her customers.

“I think women are becoming more empowered by opportunity and can stand toe-to-toe with male counterparts,” Pritchard said. “I have never felt intimidated by this industry, and I’m well-respected by this industry and the community.”

Pritchard said she believes The Woodlands will continue to grow and foster a sense of diversity among business owners.

The Greater Houston area has one of the highest population of women-owned and minority owned businesses in the U.S., according to several studies conducted in 2016.

Laura Lea Palmer, vice president of business retention and expansion for The Woodlands Area EDP, said she believes the reason The Woodlands has seen a rise in the population’s diversity and more women-and-minority-owned businesses is due to large employment sectors in the community.

“Our largest and growing sector is health care right now, and that is continuing to bring more people to The Woodlands,” Palmer said. “That is bringing more women into the workforce here too.”

Palmer said while many large corporations bring people of all backgrounds to The Woodlands community, the EDP encourages local small business owners to become involved in organizations applicable to their industry.

David Matos, treasurer of the Montgomery County Hispanic Chamber, said he believes The Woodlands’ branding and status as a family-oriented and economic community is another factor that has brought different cultures to the area and will continue to do so in the future.

“It probably has a lot to do with the way we promote this area,” Matos said. “We’re at a point where we are well-known overseas. Among Mexicans in The Woodlands, there is a saying that The Woodlands is the safest place in Mexico. I think we can expect to keep seeing more people come to The Woodlands from different countries this year.”

For those looking to open a new business in the The Woodlands, there are a variety of local and Greater Houston area resources to choose from to help build relationships with fellow business owners.

One organization specifically for women business owners is Women of The Woodlands, which was started by Kelly Rogers in 2011. Rogers said she founded the organization as a working mom without many professional relationships.

“I founded Women of The Woodlands to connect professional women who own businesses or companies or who are executives,” she said. “Our three core values are to build relationships, create awareness and foster community.”

Rogers said while only 13 members showed up to the first meeting of Women of The Woodlands, the organization now has about 100 members and meets bimonthly for social hours and group panels.

“The quality of women has grown, and it is great to see more women in leadership roles,” Rogers said. “It’s not only about networking; it’s about relationship building.”

Another resource for small-business owners in The Woodlands area is the Small Business University, a new program started in January by The Woodlands Area Chamber of Commerce. Hollie said the new initiative is a seven-course program that teaches upcoming business owners how to write a business plan, manage financing and earn business success.

Hollie said programs like these and chamber events, such as Meet the New Members and the monthly networking breakfast, foster new partnerships with business leaders and serve as learning experiences for new business owners.

Among the resources in The Woodlands and surrounding area is the Lone Star College Small Business Development Center. The center provides consultations and holds workshops and seminars for small businesses, both new and old.

The center’s main office is at LSC-University Park on Hwy. 249, but the center employs four full-time advisors who work at other campuses in the Lone Star College System, including LSC-Montgomery, Lopez said.

“We are going to see more millennial women launching businesses,” she said. “It’s the next segment into economic prosperity, and we’re  very excited to go along with them.”

Day said she wants to continue letting the small-business community know that they are not alone and that small-business owners should continue to take advantage of the organizations and resources available to them in their area.