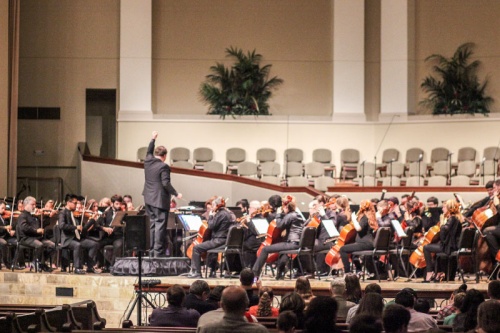 Over the past 26 years The Woodlands Symphony Orchestra has undergone several changes, including the shift from relying heavily upon the talent of professional musicians to showcasing more local, undiscovered talent, Artistic Director Darryl Bayer said.

TWSO was founded in 1992 by the late Fredell Lack, a Woodlands-based, world-renowned concert violinist who died in August 2017, Bayer said. The nonprofit orchestra performed regularly in The Woodlands area until the Great Recession hit, and the organization was forced to disband in 2008, Bayer said.

“In 2008 there were a lot of symphony orchestras across the country that had to close their doors or take huge pay cuts,” Bayer said. “So TWSO decided to close their doors—they weren’t bankrupt, but they were close to it. They had to give away their music library and equipment like music stands.”

For five years The Woodlands went without its own symphony orchestra as many residents and business owners were working to recover along with the economy. Bayer said it was not until 2013 that TWSO made its comeback.

“A small group of concerned musicians came together, and in a grassroots effort we had our first benefit concert for TWSO in 2013,” Bayer said. “Along with Beatle Band—a Beatles cover band in Houston—we performed the whole second side of the ‘Abbey Road’ [album] and the concert was called ‘Come Together.’ That’s how we let people know TWSO was back.”

“We could not survive financially if it wasn’t for all of our volunteer musicians,” Bayer said. “We’re at about 50/50 now, which is great, but I want us to get closer to 60 percent community musicians and 40 percent professional musicians. When people come to a concert, I want them to see people they know who are infused in our community.”

With the opening of the Glade Arts Foundation earlier this year, Bayer said TWSO also now has the ability to perform on a more frequent, intimate basis. The organization is in the midst of its monthly concert series, which Bayer said will continue into 2019—with each concert boasting a different theme.

“We try to keep it interesting and innovative,” Bayer said. “We don’t want it to just be a concert; we want it to be an event. We’re crossing over into other arts by including things like interpretive dancers, live painters and poets.”

To further showcase local talent, TWSO also launched the Woodlands Area Youth Symphony in 2016. The organization is open to musicians in seventh grade through junior college and practices Mondays from 6-8:30 p.m. at Lone Star
College-Montgomery.

WAYS performs its own concerts independent of TWSO as well as side-by-side concerts, during which the younger musicians get the opportunity to perform with more seasoned musicians.

Bayer said both organizations strive to reach multiple generations through a “rock pays for Bach” philosophy.

“It’s this idea of having dinner before dessert,” Bayer said. “We always start off with the classical music that attracts the older generations but then you’ve got to throw in some rock too to get to the younger generations.”

As WAYS continues to grow, Bayer said in the future he hopes to have a youth division and a senior division, which will be dependent upon age and skill level.

Formal auditions for both TWSO and WAYS occur semiannually—in late-May and in mid-August. However, Bayer said he never denies anyone who asks to audition for either organization throughout the rest of the year.

“I want to bring the art people in The Woodlands closer together,” Bayer said. “For years and years, this group did this and that group did that, but if we can start getting all of the arts groups together, The Woodlands can become the next big art scene in America.”

The Woodlands Symphony Orchestra has several live performances scheduled before the end of the year.