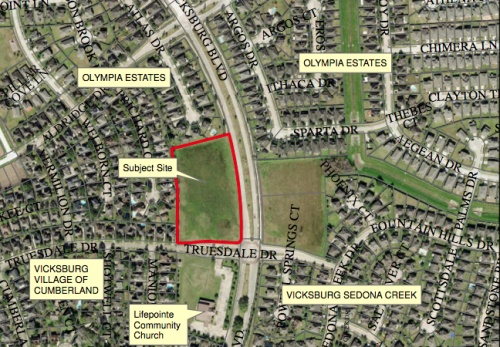 Two Missouri City business owners have sued the city and Yolanda Ford in her official capacity as mayor following a Dec. 17 City Council vote not to rezone land they purchased for commercial development.

City Council discussed the lawsuit during the closed executive session at its April 15 meeting, but did not consider any action on the item following the reconvening of the meeting. Council and Mayor Ford were recently served with the lawsuit.

Ivy Kenneth Joy Miraflor and Josefina Serrano filed the lawsuit in 151th District Court of Harris County on March 19, seeking a reversal of the decision and monetary relief between $200,000 and $1 million, according to the lawsuit.

In April 2018, Miraflor and Serrano purchased a 5-acre tract of land at Truesdale Drive and Vicksburg Boulevard intending to build a child care facility, educational and professional office, and another building for neighborhood uses.

At the time the plaintiffs purchased the land, it was zoned commercial by the Fort Bend Central Appraisal District but zoned as a single-family residential district by the city. The plaintiffs claim in their lawsuit that Missouri City benefited from this classification for over five years.

The plaintiffs brought a new zoning application to the Missouri City Planning and Zoning Commission in October, and it was sent to City Council, then under Mayor Allen Owen, with a favorable recommendation.

Residents living near the proposed development attended the commission and City Council meetings to provide remarks about the development.

Many expressed concerns with creating a commercial area within a residential neighborhood that was not along a major thoroughfare, saying it would cause additional traffic problems and could become a blight if not maintained. Those in support of the project said having a business such as a day care would be positive for families living nearby, would put the land to use other than as a vacant lot and could help future home sales.

City Council members brought the community and landowners together in order to see if some compromises could be made prior to the Dec. 17 City Council vote, but ultimately, the zoning application was voted down by council.

Following City Council’s vote not to rezone the land from residential, Cally Ross Serrano, Josefina Serrano’s son, told Community Impact Newspaper in March that they were speaking with lawyers to see what they could do about the decision.

“… relief is appropriate because there is no other adequate remedy available to correct the Defendants acceptance of the Property for commercial development,” the plaintiffs say in the lawsuit.

A trial date has not been set.