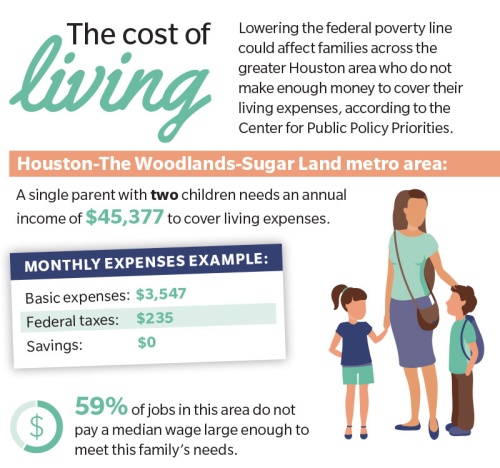 In May, the United States Office of Management and Budget began requesting public comment on the strengths, weaknesses and best practices of various Consumer Price Indexes, which affect how the federal poverty line is calculated.

However, advocacy organizations say if a new CPI measure is adopted, it would lower the federal poverty line over time, reducing the number of people who qualify for public benefits such as Medicaid, the Supplemental Nutrition Assistance Program and free school meals.

A portion of Spring and Klein’s population could be affected, as 12.6% of the population, or 18,110 households, had an annual household income of $24,999 or less in 2017, according to U.S. Census Bureau data. A family of four is considered below the 2019 federal poverty line if its annual household income is $25,750 or less, according to the Center for Public Policy Priorities, an independent public policy association.

Locally, ZIP code 77090 could be the hardest struck as 21.4% of the population fell below the federal poverty line in 2017, according to Census Bureau data.

The poverty line is updated annually for inflation and is based off the CPI for all urban consumers, or CPI-U, which is a measure of the price of a market basket of goods and services, said Frances Deviney, chief operating officer and director of the CPPP’s research and planning team, during a June 11 webinar.

The most widely discussed approach presented by the OMB is known as Chained-CPI-U, which is 0.25% lower than the traditional CPI-U, Deviney said.

“That might not sound too bad, a quarter of a point lower. … Well, it’s pretty significant over time,” she said. “You would actually see a compounding effect.”

For instance, using CPI-U, the 2019 poverty guideline for a family of four is $25,750 per year, Deviney said. But using Chained-CPI-U, that amount would be closer to $25,687, and the difference would increase each year.

According to the Center on Budget and Policy Priorities, a nonpartisan research and policy institute, if the Chained-CPI-U was implemented for 10 years, 250,000 seniors and people with disabilities would lose or get less help paying Medicare prescription drug costs. Additionally, 250,000 adults and 300,000 children would lose Medicaid coverage.
SHARE THIS STORY