After 57 years, the legacy of Larry’s Original Mexican Restaurant lives on in Richmond 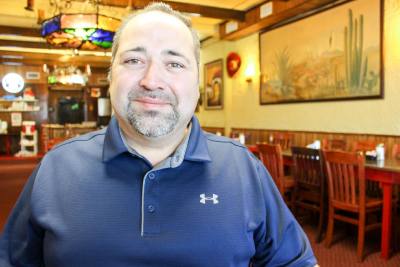 Third-generation owner Eberardo Guerrero III said he has worked with his family since he was a teenager.

UPDATED Dec. 8 9:29 A.M. Previous versions of this article reported Guerrero was the sole owner of Larry's; Community Impact has learned he is a manager and that the restaurant is shared among the Guerrero family.

Larry’s Original Mexican Restaurant off Hwy. 90 in Richmond has been serving authentic, traditional Tex-Mex cuisine for more than 50 years.

“You’re not going to get this food anywhere else,”  manager Eberardo Guerrero III said.

The family owned and operated restaurant is a staple in the community, and Guerrero said the best way to keep business going is to keep it the same.

“There’s people that come here for three or four generations,” Guerrero, who goes by Eddie, said. “One thing I’ve learned–don’t mess with the food.”

Guerrero started working in his family’s restaurants when he was about 14 or 15 years old. His grandfather, Eberardo Guerrero Sr., opened Larry’s in 1960 with the help of Felix Tijerina, who some say started the Tex-Mex empire in Houston, and “Mama Ninfa” or Maria Ninfa Rodriguez Laurenzo, the founder of Ninfa’s. Tijerina shared his recipes with Guerrero Sr. while Mama Ninfa helped set up the kitchen.

“So the deal was he had to get his tortillas from her,” Guerrero said. “That’s the only thing we don’t make from scratch here, is the tortillas.”

Guerrero said one of the dishes that makes Larry’s unique is the chili con queso, which can take up to two days to make.

“It’s a long process. There are so many steps in making it, but the end result is an awesome chili con queso,” Guerrero said.

With the passing of his father in 2016, Guerrero has taken on the challenge of keeping his family’s legacy alive all in stride.

“Growing up, my grandpa was like the patriarch of the family. So when he passed away, it was a big deal,” Guerrero said. “And now that my dad is gone it’s just all the responsibility falls on me. That’s what keeps me going, making sure this place keeps going.”

Guerrero said aside from the floods Richmond has seen over the last few years, business has been pretty steady.

“...the flood comes, business drops off and everything you have saved up, it goes back into the business and once you start doing well again you get another flood,” Guerrero said. “[But] we are still here, we are still going.”

Guerrero has kept mostly everything at Larry’s the same. His mother still works the front register; his family has had some of the same staff for decades.

“We like to get our guys trained to where they work here a long time, they get to know the customers, the customers know them,” Guerrero said. “That way [when] you walk in they know you want a margarita on Monday night [and] they bring you a margarita–you don’t even have to ask.”

Some of Larry’s most popular dishes are the special combination nachos, a special homemade recipe from Guerrero’s father, fajitas and enchiladas.

“My dad was a connoisseur of food, he loved food,” Guerrero said. “One time he fixed this plate [the special combination nachos.] My grandpa saw him eating it one day [and] said it was great, so he decided to put it on the menu and that’s probably one of our number one sellers to this day.”

Guerrero said his family tried opening another location but too many complications convinced him to stay put for now. He said in another five years he may reconsider expanding, but for the time being he said he is content with the way things are.

“It means a lot to me, to know that you put so much work into a place to keep it going and it just keeps going and going,” Guerrero said. “Hopefully, it will go another 57 years.”
SHARE THIS STORY