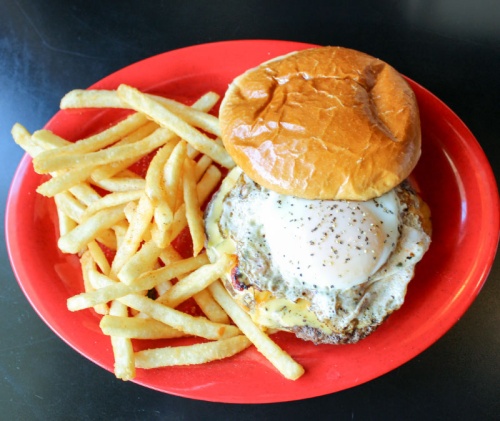 Tucked between Katy and Richmond off FM 1093 and FM 1463, Texas Borders Bar and Grill offers a friendly atmosphere and diverse menu that promises there is something for everyone at this neighborhood spot—new and old customers alike.

“A little Mexican, a little Cajun and a little all-American—we have foods from around the [Texas] border,” owner Kellie Messer said.

Customers can take a trip around the border and try the blackened chicken wings, which have a cult following, according to Messer, chicken-fried chicken with mashed potatoes smothered in creamy homemade queso or spicy gumbo, her mother’s recipe.

“All of our food is homemade—we are a scratch kitchen,” Messer said.

The open layout of the restaurant offers plenty of space with banquet rooms for parties, an arcade playroom and playground and full-service bar that connects to a patio that occasionally hosts live performances.

“Our motto is ‘Great food, great atmosphere and amazing service’—that’s what we strive for,” Messer said.
Messer hails from New Orleans and has worked in the food industry most of her life. After years of looking for a second location, she finally found the FM 1093 spot and built it from the ground up alongside her partner Kevin Wann.

“We all built it blood, sweat and tears; we were here day-in and day-out,” Messer said. “We opened up extremely busy and well-received.”

Messer said she thinks her decision to open the second Texas Borders in Richmond was the right call, considering the growth the area has seen recently.

“It’s exploding out here,” Messer said. “I feel like the growth is moving this way­—Richmond, Fulshear, Simonton, it’s moving that way.”

Messer said it was not always smooth sailing. Taking into account the Great Recession in 2008, working as a female owner and her own personal hardships, it has taken Messer nearly 20 years since she opened her first location in 1996 to capture the vision she has had for Texas Borders.

“Anybody that knows me knows I have always said that I wanted to open a second location,” Messer said. “Nobody thought I was serious because so many things fell through—it wasn’t the right time or I didn’t really have the resources.”

Messer said a big motivation for her to push to a second location was her staff, some of whom have worked for her since she started 20 years ago.

“That was always my motivation: to keep my doors open for the people that work for me and were loyal to me,” Messer said. “[The most challenging part was] all those years I guess was just believing in yourself that you could really do it alone, and you just do it.”

Messer said she is hoping to open another location within the next two years—either in Katy or Cypress— and to use her newest location as a prototype for future expansions. As a working hands-on owner who strives to build personal relationships with her customers, Messer said chances are most people know who the brunette in the apron running around the restaurant is.

“My staff has a joke that we want to get a shirt that says, ‘I know Kellie, too,’” Messer said. “We are like one big family and that’s what we want to create with our customers—where they feel like they are family coming here.”
SHARE THIS STORY