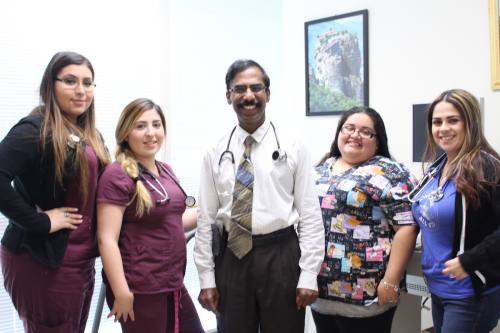 Dr. Periyanan Vaduganathan, center, stands with his staff at SEVA Clinic, a medical nonprofit in Pearland providing access to primary and pediatric care for low-income families.

The city of Pearland will see its first nonprofit medical clinic open on June 1 at the Pearland Neighborhood Center.

“We are very excited that the clinic is going to be available to a lot of our families in need,” said Debbie Rubestello, the director of the Pearland Neighborhood Center.

SEVA Clinic is on a mission to serve low-income families in the area who may not have access to health insurance or are priced out of the doctor's office. Previously, the Pearland Neighborhood Center directed families to Stephen F. Austin clinic in Alvin, which was the closest charity clinic in north Brazoria County, Rubestello said. But patients living in Pearland who lacked transportation, particularly senior citizens, struggled to receive the care they needed.

SEVA Clinic will open its doors to patients every Thursday from 5:30 p.m. to 7:30 p.m. The clinic is located at 2335 N. Texas Avenue, in the Pearland Neighborhood Center.

“A lot of our seniors would sit at home sick, and they would end up so sick that they would have to go to a hospital,” Rubestello said.

The founding chairman for the clinic is Periyanan Vaduganathan, a cardiologist and chief of staff at Memorial Hermann Southeast Hospital. Vaduganathan, who has practiced medicine in the Houston area for 21 years, will donate his time as a volunteer physician at the clinic. All medical staff at SEVA Clinic will be on a volunteer basis. Dr. Periyanan Vaduganathan founded SEVA Clinic, a medical nonprofit in Pearland, to serve low-income families in and around north Brazoria County. The clinic is located in the Pearland Neighborhood Center.[/caption]

Dr. Nathan thought of the idea for SEVA clinic while he was running a clinic in Temple. Many patients expressed interest in a free clinic in the Pearland area. Two years later, that idea has come to fruition.

“I thought I could put together a contribution to give back to this community for those who are in need and could not afford care,” Vaduganathan said. “If they can be treated in a clinic, then they do not have to go to an emergency room.”

Rubestello notes that many low-income clients will go to the emergency room, as they are unable to afford or find transportation to the nearest clinic. With a clinic in the neighborhood, Rubestello hopes that this problem will be eliminated.

“We do see a lot of need every day with a lot of our clients sick who can’t afford to go to a clinic, so they go to the emergency room when they shouldn’t necessarily be in an emergency room,” said Rubestello. “We are so happy to have [SEVA Clinic] on site.”

With support from the Pearland Neighborhood Center and financial buy-in from the community,Vaduganathan plans to expand the clinic in with additional services and equipment, including a lab for routine blood work, an x-ray machine, vaccinations and a pharmacy for chronic care patients. He also hopes to staff up to 10 general practitioners and 10 pediatricians. Currently, the clinic has one general practitioner, a nurse and a pediatrician on staff.

“We were very encouraged from the community,” Vaduganathan said. “We have overwhelming support and people are willing to donate.”

The nonprofit is a walk-in clinic for primary care cases, such as diabetes, hypertension and other non-emergency cases. All services will be at no cost to patients, but a donation of $10 per visit is encouraged for those who are capable.

The inauguration ceremony for the clinic was held on Saturday May 20 at the Pearland Neighborhood Center with about 125 attendants, including Mayor Tom Reid.