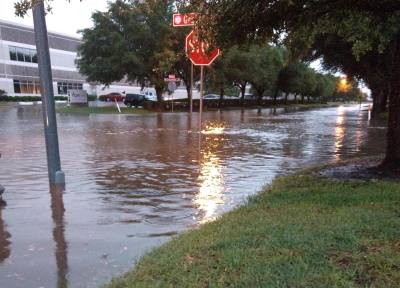 Several streets in Fort Bend County, including the Fulshear area, experienced high water during yesterday's rain event. More rainfall is expected throughout the remainder of the week.

Fort Bend County Judge KP George has issued a disaster declaration for flash flooding and potential Brazos River flooding, according to a Facebook post shared just before 10 p.m. May 7.

The declaration authorizes the county to take certain response and recovery actions and is the first step which can ultimately result in state or federal declarations, the post states.

“Our residents need to understand that this is a serious threat,” George said in the post. “This flash flooding tonight is contributing to the Brazos River levels, which still pose a threat later this week. We are not out of the woods yet.”

In a Facebook post published around 9:10 a.m., George stated that the Fort Bend Office of Emergency Management is still monitoring the weather forecast and the level of Bravos River.

“Yesterday Fort Bend County received up to 11 inches of rain in some parts of the county,” he said. “Weather forecasting indicates that more rain is on its way. Do not take this lightly. Please take the time to prepare and have a plan in place. “

According to another Facebook post, May 7 rainfall exceeded the National Weather Service’s expectations. The U.S. Geological Survey shows the Brazos River rain gauge in Richmond has measured nearly 8 inches of rain since the rainfall began in the afternoon of May 7. As of 6:15 a.m. May 8, the river measured at 46.68 feet.

“Our channels, bayou and reservoir still have plenty of capacity to handle additional rains,” she wrote.

The city of Katy Office of Emergency Management posted on Facebook around 7 p.m. May 7 that it expected minor flooding. Public Works crews were repairing a main water break on East Third Street between Airline and Drexel drives as of 10 p.m. May 7, according to another Facebook post.

According to ABC13, more rain is heading to the Greater Houston area.
SHARE THIS STORY