Another round of heavy rain, strong storms expected in Houston area this afternoon, May 8 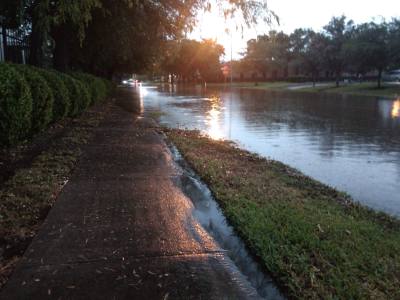 The Sugar Land and Stafford areas received 7 inches of rainfall Tuesday, May 7, resulting in street flooding.

Strong thunderstorms are expected to ramp up this afternoon in the Houston area.

Expect faster-moving storms today, not as slow as the rain that occurred on Tuesday. There is a 70 percent chance of showers and storms that could produce large hail, gusty winds, an isolated tornado and more flooding.

Residents will want to stay aware and informed this week as a stormy weather pattern moves into Houston. Rain chances will increase greatly toward the end of the week as a weak front stalls near Houston Thursday through Saturday.

The threat for heavy rainfall increases Thursday through Saturday with the front stalled out, the active jet stream overhead, and a constant flow of moisture coming in from the Gulf. Seven to 10 inches of rain will be common when you total up all the rain over the next seven days, with most of that falling Thursday, Friday, and Saturday.

The potential for street flooding and river flooding will increase with each passing round of rain. Bayou and creek flooding cannot be ruled out, but that will be highly dependent on exactly where the heaviest rains fall.