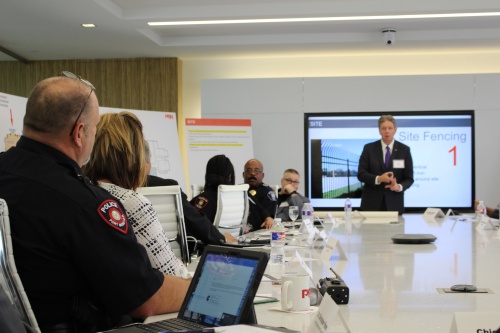 PBK Partner Ian Powell said the Texas School Safety and Security Council's Aug. 8 meeting was the first step to form opinions that the TSSSC would endorse as best practices for school safety design.

The council, which initially formed in June with the help of PBK representatives and Alan Bragg, retired Cy-Fair ISD police chief, met for the second time Aug. 8 for a planning meeting. Twenty-five police chiefs from all over the Greater Houston area, Galveston and Dallas met to discuss different safety design recommendations and best practices.

“They are chiefs of police so they are experts in this,” PBK Architects Partner Ian Powell said. “They have a useful voice and we think that that’s the best voice to help districts do a more intelligent, stronger, more comprehensive job of doing safety and security planning.”

Bragg stressed that the council’s reach is far, considering its goal is to have a statewide effect on increasing safety in schools.

“We are more than just a Houston area group, we are statewide,” Bragg said. “The goal is for us to work with them [PBK] and ensure that when we build those new schools, we put in those security features that the chiefs and the other police departments think should be there to protect our kids, and our staff and our students.”

PBK Founder and CEO Dan Boggio told chiefs during the Aug. 8 meeting the firm is planning to publish a book by July 2019 on school safety and security that he hopes will be used nationwide as a manual for best practices for designing safer schools.

“We know of thousands of people in this industry, our peers, other architects need this information, school administrators need it,” Boggio said. “We’ve got to uncover the best environments that we can possibly design.”

Boggio said the founding members of the council would be included as authors of the book and may also feature other experts from California.

“The authors of this book are going to be the most experienced police chiefs in the state of Texas,” Boggio said.

The council is expected to meet again sometime in October and then will have quarterly meetings until a final list of best practices is created.

“Three months from now, [the recommendations] may change, because technologies change,” Boggio said. “But we can’t wait forever to start issuing recommendations.”
SHARE THIS STORY