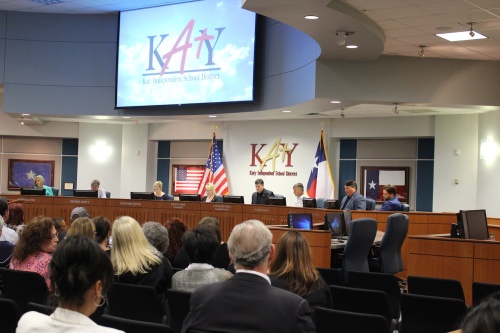 Katy ISD Superintendent Lance Hindt announced he will resign effective Jan. 1, 2019 at a special board meeting May 10.

UPDATED 3:06 P.M. MAY 14
Katy ISD released an update to Hindt's contract May 11, in which it is stated that Hindt will receive more than $750,000 in a severance package once he retires Jan. 1. The package is equal to two years of his base salary rate; the Texas Education Agency's 2017-2018 superintendent salary report for Hindt is $386,850.

The amendment also calls for the district to incur all legal fees associated with the defamation suit on behalf of Hindt. In the new contract Hindt is required to reimburse the district for 50 percent of the cost up to $25,000.

Original post 10 p.m. May 10
Katy ISD Superintendent Lance Hindt announced May 10 at a special board meeting he will resign from his position effective Jan. 1, 2019.

"My wife and my children, they need me," Hindt said. "In light of an organized, relentless and dishonest smear campaign against me, I cannot remain superintendent of Katy ISD while fulfilling those duties and still fulfill my sacred duty as a husband and father."

Before Hindt's announcement, the board of trustees voted unanimously to approve an order for outside special counsel to pursue legal action for a possible defamation suit on behalf of Hindt and KISD staff. The district has not commented on who the defendant might be as of press time.

District officials said the defamation of Hindt has interfered with the district's strategic plan and warranted expenditure of public funds for a possible defamation lawsuit.

Some trustees provided comments after the announcement and showed support for Hindt. Trustee Bill Lacy said the district itself has become a victim of bullying, and that more has to be done to address the bullying and scare tactics that were used against Hindt and his family, the district and KISD staff.

"Now our teachers are afraid, they are afraid that they are next," Trustee Rebecca Fox said. "They can't do their jobs now."

The announcement comes nearly two months after Katy businessman Greg Gay, also known as Greg Barrett, accused Hindt at a March 19 school board meeting of bullying him when they were in middle school together more than 30 years ago. Gay described the alleged incident during which he said Hindt forced his head into a urinal while they were in the boys bathroom. Gay said Hindt’s actions led him to contemplate suicide.

Following Gay’s accusation, three more allegations were made against Hindt contributing to the claim he was a vicious bully in his teens. Hindt ended up apologizing to district staff for allegations surrounding him and the district April 6.

“You essentially have to prove that the defendant either acted with actual knowledge of falsity or with reckless disregard for the truth,” Baruch said.

“It’s just very, very strange to me that they would be utilizing taxpayer’s dollars for that purpose,” Baruch said. “As someone who was in education for many years I can only say I really hope that they’ve done an enormous amount of investigation to assure themselves beyond any question that these allegations are false, because the message if they have not done that diligence, the message that they would be sending to potential victims of bullying in their own district is not a very good one.”

Baruch said the defendant in the case might use a statute called the Texas Citizens Participation Act, also known as the Texas Anti SLAPP law, that was passed to deter lawsuits that are designed to intimidate people who are attempting to exercise their constitutional speech rights.

The Katy ISD board of trustees will meet again at 6:30 p.m. May 29 at the Education Support Complex for a regularly scheduled meeting at 6301 S. Stadium Lane, Katy.