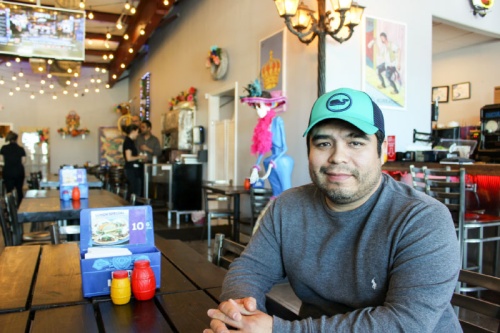 Miguel Jimenez tried to sound as modest as possible when he said he believes he technically started the Mexican street taco trend in Katy.

“I am not saying I started it, I am just saying I was the first one in Katy to sell [street tacos],” Jimenez said. “And then it started catching on.”

“This is what you find on the streets,” Jimenez said. “But sometimes it’s not going to be healthy—which makes it better. It’s very authentic.”

Originally from Tamaulipas, Mexico, Jiminez said he grew up in the rougher part of Katy. He said he knew from 13 years old he wanted to sell tacos.

After graduating from high school, Jimenez asked the owner of the K K Food Mart gas station off Pin Oak Road if he could sell tacos out there.

“That was how I got into the taco business,” he said.

Jimenez said selling his street tacos at the Pin Oak location was so successful it led him to open four other gas station kitchens throughout the area. Jimenez said Mexican street tacos are smaller compared to a Tex-Mex taco, and consist of a meat-filled corn tortilla with onions and cilantro.

“It was something different, and people went crazy,” Jimenez said.

After opening and closing several gas station kitchens, he now owns three stand-alone restaurants: one off FM 359 in Brookshire and two Katy locations off Westgreen and Katy Mills boulevards.

“The Katy customers have always been very supportive,” Jimenez said.

“We were closing down not because we needed customers, but because people were demanding to eat in cleaner places, [and] they wanted to sit down with their families,” he said.

Jimenez said there are many differences between Tex-Mex food and authentic Mexican food. His traditional enchiladas, which are fried and served with meat on the side, are not what most Houstonians are used to.

“The enchiladas with the chile sauce and the cheese sauce? You’ll never find that in Mexico,” he said.

Jimenez said he said he has plans to open another location in the Katy area soon and he is currently also in the process of becoming a franchise.

“I am always thinking what to do next, I am here for the long run,” he said.