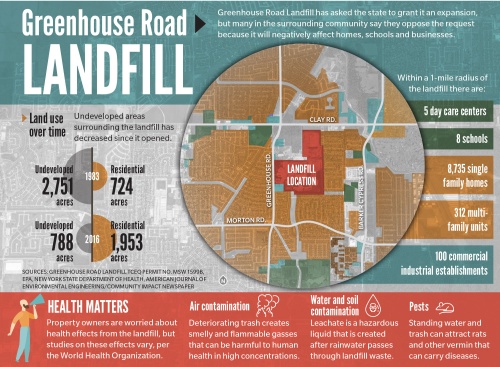 Nestled among a handful of neighborhoods in the northeast part of the Katy area, Greenhouse Road Landfill hopes to expand its footprint.

Greenhouse Road Landfill LP, an affiliate of G.O. Weiss Inc., applied for a permit amendment in November 2016 through the Texas Commission on Environmental Quality to expand the landfill by 32 acres and increase the landfill’s height by 20 feet.

But many residents, business owners, officials and organizations oppose the expansion at 3510 Greenhouse Road, Houston. They cite drainage, health and property value concerns among nearly 600 comments submitted to TCEQ between December 2016 and March—which includes two public meetings—about the expansion.

Halting or approving the expansion will take time as it goes through the TCEQ review process. In the next few months, TCEQ will decide whether the permit request should undergo a hearing before issuing an approval or denial.

“Greenhouse Road Landfill had been a bad actor,” said Rodrigo Cantu of Lone Star Aid, which is representing Guillermo Lopez and Linnette Figueroa, whose homes are 70 feet south and 600 feet east, respectively, from the landfill. “This is an opportunity for my clients to say that the landfill shouldn’t be allowed to expand precisely because of the way in which the site has been managed.”

Greenhouse Road Landfill opened in 1983, and the surrounding area was mostly undeveloped, according to Operations Manager and owner Greg Weiss’ presentation at the March 28 public meeting and the landfill’s original permit.

Gary Brown, head of the Stop Greenhouse Landfill organization, said he moved into his Rolling Green house on the eastern border of the landfill in 1992. He said he did not notice odors or drainage problems until after the landfill expanded in 2000.

The Houston area’s growth is why the landfill needs to expand again, Weiss said in an email.

He declined to provide the investment cost for the expansion and the landfill’s annual revenue for the latest fiscal year.

Many nearby residents and interested parties submitted comments to the TCEQ opposing the expansion for several reasons, including drainage issues.

The Harris County Pollution Control Service conducted an inspection in May 2017, according to comments. It did not find a catch system for stormwater on the landfill’s east side and found evidence indicating stormwater may flow off-site.

The inspection also found the landfill did not comply with three drainage provisions in a 2000 settlement with the Rolling Green subdivision.

Weiss said in an email the landfill is working to resolve these alleged violations. He told Community Impact Newspaper in 2018 some of the 2000 agreement’s measures had not been implemented as that point in development had not been reached.

If the expansion is approved, Greenhouse Road Landfill will make improvements to its drainage detention systems, Weiss said.

Harris County also said in its comments the PCS issued two violation notices to the landfill after conducting inspections resulting from complaints of exposed waste. PCS has also received complaints of groundwater contamination and odor complaints but has not found supporting evidence.

TCEQ received eight complaints since 2006, which resulted five completed investigations and two violations that were resolved.

Weiss said in an email the landfill works with agencies to resolve any alleged violations. In 2018, he told Community Impact Newspaper two citations were addressed or inaccurate.

Residents are also worried about diseases carried by landfill vermin and health risks from gases, dust, mold and asbestos from Hurricane Harvey debris emitted from the trash. Yet studies on the health effects from landfills vary in their results.

“The available scientific evidence on the waste-related health effects is not conclusive, but suggests the possible occurrence of serious adverse effects, including mortality, cancer, reproductive health, and milder effects affecting well-being,” according to 2015 World Health Organization report.

Decreasing property values are also a concern from nearby residents, but data from Houston Association of Realtors shows this not to be the case among seven neighborhoods surrounding the landfill. For example, the median price per square foot of Rolling Green homes jumped from $39.63 in 1997 to $93.81 in 2018.

Not everyone sees the landfill as nuisance. At the March 28 public meeting, Randy Love, a Barker Ridge resident and the Harris County Municipal Utility District 238 president, said he has had drainage issues on his property, which borders the landfill on Appletree Hill Lane. But Love, who has lived at his home since 1991, said Weiss always fixed the problems.

“When I call him up, he’s always been able to see me in a timely manner,” Love said.

In the coming months, a TCEQ executive director will craft a response to comments, and TCEQ commissioners will decide whether to hold a contested case hearing. This is a legal proceeding conducted by the State Office of Administrative Hearings to review the permit application and hear arguments for and against the expansion, according to the TCEQ.

After the hearing, the SOAH recommends denying, approving or modifying the permit, but the commissioners do not have to follow the suggestion. If the permit is approved, opposition can submit a motion for a rehearing. If the rehearing comes with the same outcome, the opposition can file an appeal with the District Court.

“This is a landfill that keeps growing right in the back of these people’s homes,” Rosanne Barone with the Texas Campaign for the Environment said at the March 28 public meeting. “And there’s nothing to stop it except for [the TCEQ], except for this process.”

Some residents call the Landfill Road Greenhouse a bad neighbor, but Weiss denied these assertions in an email.

“We have always strived to be a good neighbor,” he said. “What we do is provide economical waste disposal capacity to the entire [Houston] area, including following natural disasters.”