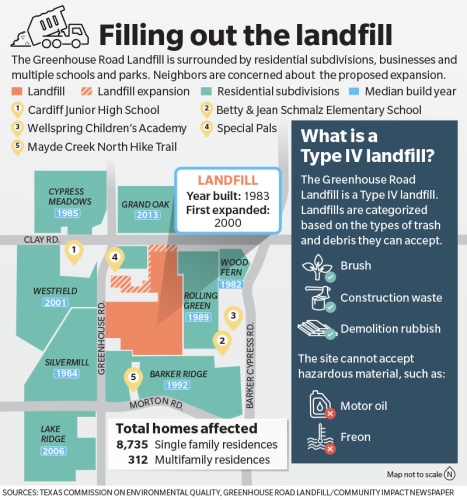 Neighbors and businesses as well as state and county officials are opposing the attempted expansion of a Katy-area landfill due to environmental, safety and compliance concerns.

The owner of the Greenhouse Road Landfill at 3510 Greenhouse Road, Katy, applied for a permit amendment in November 2016 through the Texas Commission on Environmental Quality to expand an additional 31 acres. One acre would be used as a buffer between the landfill and surrounding properties and the height of the landfill would increase nearly 20 feet, according to the permit application filed with TCEQ.

The application states these changes would extend the life of the landfill from an estimated 13 to 36 years, and increase its overall capacity by more than 9 million cubic yards.

Nearby residents object to the expansion—calling it an eyesore—and cited odors and compliance issues.

Brown believes that the expansion would violate a settlement from 2000. The agreement was a negotiated settlement between Rolling Green, Harris County and the landfill to mitigate the landfill’s impact on the area.

Brown’s backyard borders the landfill and he has rallied the neighborhood against the expansion. Neighbors are concerned about their property values declining, but commercial owners are also worried.

“We’re concerned that we don’t know all of the information, or that maybe there’s not enough willingness to share info, and I guess ultimately if there’s an issue with contaminating our water source,” Trick said.

Landfill owner Garry Weiss, president of G.O. Weiss Inc., said the company has filed an amendment to its existing permit, and the proposed expansion does not violate the 2000 settlement between the landfill, county and Rolling Green subdivision.

“This is a separate permitting process—a separate amendment,” Weiss said. “We worked with the county in the past and the neighborhoods, and we’re willing to do that again.”

Latrice Babin, deputy director at Harris County Pollution Control Services, said via email the department has received an increase in odor complaints about the facility since Tropical Storm Harvey, but such an increase related to landfills is common after flooding. Complainants noted a rotten egg smell from the property.

HCPCS said it received 11 complaints, conducted 40 inspections and issued two permit violations for the landfill since January 2000. The first violation citation was issued in May 2005 for water runoff causing sediment buildup. The second was issued in June for litter and unrepaired erosion gullies.

The June inspection also found violations of the 2000 settlement agreement. Residents had also complained about water from the landfill flowing into their yards.

Weiss said the concerns in the two citations, as well as in a letter from the county attorney earlier this year, had been addressed or were inaccurate. He said he has dealt with drainage, erosion, debris and odor issues but some of the agreement’s measures have not been implemented because that point in development has not been reached.

TCEQ reported the agency has issued no violations against the landfill. State Rep. Dwayne Bohac, R-Houston, opposes the expansion, saying in a letter to TCEQ the landfill conflicts with surrounding parks, subdivisions and the West Houston Airport.

Weiss disagreed, saying he feels the site and his company support the community by collecting trash and debris.

Harris County intends to join the expansion discussion. Steve Radack, commissioner for Harris County Precinct 3, said that he stands with his constituents in opposing the expansion and has asked the county attorney’s office to request a contested hearing through the TCEQ.

“We will get the involvement of the county engineer, the Harris County Flood Control District and any other officials that need to be involved.” Radack said.