Here's what to expect at the Addicks Reservoir watershed community meeting on Thursday, June 21 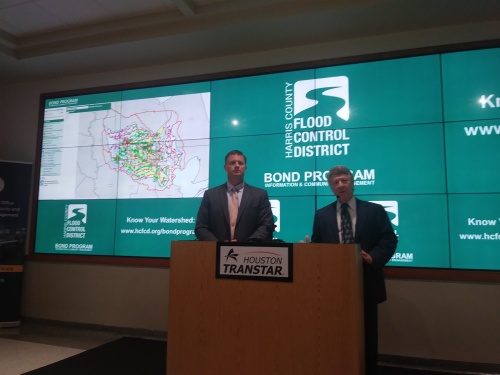 Updated 4:08 p.m. June 18: This story has been updated to include additional information on the Addicks Reservoir watershed meeting.

Harris County has started holding community meetings to get feedback from residents regarding how to spend funds now that commissioners have set the date for a $2.5 billion referendum for flooding and drainage projects throughout Harris County.

A meeting has not yet been scheduled for the Barker Reservoir watershed, which includes Mason Creek. Several repair projects are in development for Mason Creek, according to information provided by HCFCD. The only major project is a $750,000 study being conducted jointly with the U.S. Army Corps of Engineers on the effectiveness and operation of both the Addicks and Barker reservoirs.

Hastings said there are many projects county-wide in a planning or “shovel-ready” stage that have been designed by Harris County engineers. Repairs to the Addicks Reservoir watershed are already underway.

Hastings said it is important for residents to be aware of the community meetings.

“We believe, however, that residents have knowledge about their particular neighborhood, and ideas that we should consider,” Hastings said via email.

“We are updating the proposed project list weekly based on input from the community meetings,” Hastings said.

Those attending the meeting can expect brief opening statements by county officials, Hastings said. After that, staff will be available to answer questions and record flood mitigation suggestions from county residents. However, residents do not have to go to the meetings to participate.

“People can participate in various ways, including on paper or by phone at a later time that is more convenient for them,” Hastings said.

A list of projects currently being considered or in-progress by HCFCD can be found here.

To provide input on the HCFCD bond program, Harris County residents may call 713-684-4107 or submit feedback in writing to: Harris County residents who are unable to attend the meetings may still provide feedback following the instructions in this flier.[/caption]
SHARE THIS STORY