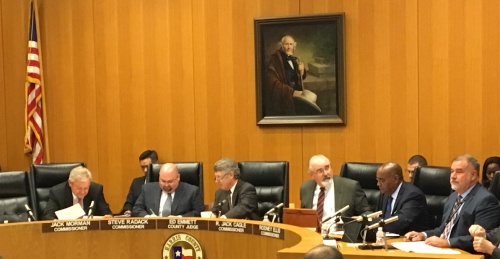 Harris County Commissioners Court unanimously voted in favoring of holding a $2.5 billion bond election on Aug. 25 at its Tuesday meeting.

Harris County Commissioners Court on Tuesday unanimously voted in favor of holding a $2.5 billion bond election on Aug. 25. If voters approve the referendum, the bonds will fund more than 100 flood mitigation projects throughout the county.

The bond election is set to take place exactly one year after Hurricane Harvey hit the area in 2017, dropping one trillion gallons of water across Harris County and flooding 154,170 structures in the county, according to a county report.

The county has a list of 150 projects that could receive funding, but it is seeking public feedback on which projects should be included in a final bond package. To gather this feedback, the county is scheduling 23 community meetings to take place over the next two months, with one meeting taking place in each watershed. Residents who cannot attend a meeting may submit their comments online.

In addition to physical projects, the funding will be used to perform studies and match funding the county will receive for flood mitigation projects through federal sources, which often requires a local match.

Emmett said the county hopes to have a final list of projects to share with the public by Aug. 1. Early voting will begin on Aug. 8.

Because the county is solely funded by property taxes, issuing the bonds will increase the amount residents pay in property taxes. Emmett said this increase will be spread out because HCFCD plans to use the bonds over a 10-15 year period.

According to a county press release, most homeowners will experience a 1.4 percent or smaller increase to the property taxes they pay to HCFCD if voters approve the referendum. Harris County residents currently pay about 3 cents per $100 valuation to HCFCD annually.

In addition to setting a date and dollar amount for the bond election, commissioners also authorized HCFCD to accept $25.67 million of grant funding from the Federal Emergency Management Agency. The money was allocated by the state to purchase 170 homes that flooded during Hurricane Harvey. According to Tuesday's meeting agenda, this grant funding requires the county to match $10.25 million of the cost.

This is the first allocation of federal funding the county has received in response to Harvey. In April, HCFCD submitted a grant application to the state and FEMA requesting $163.5 million—with the county matching $54.5 million— to buy out 1,000 homes. According to a press release, the state is still reviewing the remaining funds HCFCD requested in its application.
SHARE THIS STORY