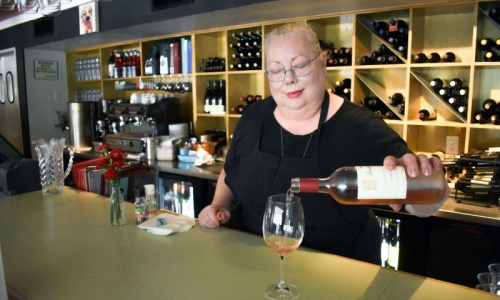 To keep up with Houston’s active restaurant scene, the menu at Giacomo’s Cibo e Vino adapts to newcomers.

“There’s so many wonderful restaurants in Houston; you can’t be too rigid,” owner Lynette Hawkins said. “You have to be willing to change and adjust to people’s taste and play around with it.”

One consistency customers have come to expect at Giacomo’s over the last 10 years, however, is its comforting atmosphere, Hawkins said. Previously the owner of Houston restaurant La Mora Cucina Toscana, Hawkins closed it after nearly two decades and took time off to care for her father. When she returned to the business, she said a less formal, more relaxing environment was her priority.

“I want customers to feel like I’m serving them in my kitchen,” she said.

Dishes such as Polpetti Puccini, or beef and pork meatballs, and Salsiccia di Pollo, or chicken sausage, are inspired by the authentic Italian cuisine Hawkins said she remembers from portions of her childhood and adolescence spent in Italy.

“The best compliment I ever receive is that my pasta reminds [customers] of their mother’s or their grandmother’s [pasta],” Hawkins said.

A variety of small, shareable plates mimic the offerings at a bacaro—a style of wine bar with small plates common in Italy. When Giacomo’s first opened in 2009, many Houstonians were not as familiar with the format but the dishes have since become customer’s favorites, Hawkins said. Other dishes draw influence from France and even the Middle East, where Hawkins’ father spent time working in the oil industry.

Larger entrees include tortellini, gnocchi and ratatouille and are accompanied by an extensive wine list Hawkins updates frequently. As Hawkins approaches Giacomo’s 10th anniversary in September with decades of previous restaurant experience under her belt, she continues to spend most of her time in the kitchen creating new recipes and helping prepare time-intensive dishes, such as homemade pasta and bolognese.

“Here, I really get to just stay in the kitchen and do what I love to do,” Hawkins said.