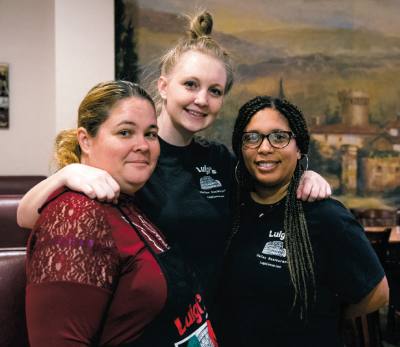 For nearly five years, Luigi’s Italian Restaurant has offered homestyle Italian food to the Conroe community. Following a change of ownership in 2016, the restaurant continues to build on its legacy of Italian food and soulful cooking.
Owner Shawn Magee grew up in New Orleans, cooking soul food for large groups of family, friends and functions ever since she was 14.
“I had no choice but to learn how to cook,” she said. “I started experimenting more in the kitchen whenever we had parties. People always wanted me to cook for different functions that we had. I didn’t know how to cook small; I’ve always known how to cook big.”
Although Magee and her family originally set out to find a soul food restaurant for themselves, in March 2016 they purchased Luigi’s Italian. The restaurant was opened by its original owner about five years ago at the intersection of Loop 336 and Hwy. 105.
“We really wanted something small and intimate,” Magee said. “Something that was more word-of-mouth and family-friendly. With us being from New Orleans where everybody is personable, we wanted to offer a personal touch.”
The restaurant offers Italian staples, such as lasagna, spaghetti and meatballs, and tortellini dishes. Magee said the restaurant’s alla panna sauce—a mixture of its marinara sauce and Alfredo sauce—is popular with customers.
Magee also offers her own dish, the Shawn Special, which she said harkens back to her roots. The pasta dish is made with the restaurant’s alla panna sauce, shrimp and chicken.
“I call it my Cajun dish from New Orleans,” she said.
The restaurant also offers on-site and off-site catering as well as live music on occasional Saturdays.
Ultimately, Magee said she is proud to operate the restaurant and said it provides a positive example for her children.
“It feels good to let your children see that you can do anything if you put your mind to it,” Magee said. “You can achieve whatever goals that you want. But at the end of it all, it’s hard work.”
SHARE THIS STORY