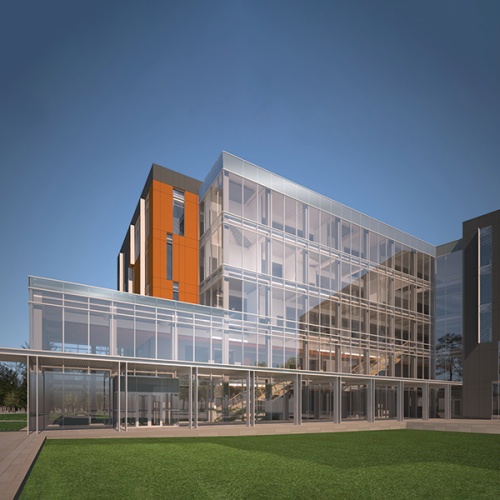 The five-story, $65 million project on 7.3 acres is slated for a December 2019 completion.

Sam Houston State University is one step closer to having a medical college in Conroe.

“I am grateful for the support of numerous state leaders in making our proposed College of Osteopathic Medicine a reality for millions of rural and underserved Texans,” SHSU President Dana Hoyt said in a statement.

The bill allows the school access to specialized insurance coverage, residency funding and other programs such as soliciting gifts and grants. The bill also sets up SHSU to be the first university to offer a Doctor of Osteopathic Medicine degree in the Greater Houston area and one of three total osteopathic medical schools in Texas—joining the University of North Texas Health Science Center in Denton and the University of Incarnate Word School of Osteopathic Medicine in San Antonio.

“It is a unique approach that will benefit the entire state, but especially rural and underserved areas,” said Sen. Brandon Creighton, R-Conroe, a sponsor of the bill, in a statement.

The five-story, $65 million project on 7.3 acres is slated to be completed in December. The proposed college plans to open SHSU Physicians, a health clinic, later this year to provide learning opportunities for students and a place practicing faculty can deliver care.

“As a proud Bearkat, I could not be more excited to author this legislation and see it pass,” said bill co-author Rep. Will Metcalf, R-Conroe, in a statement. "Sam Houston State’s approach to this osteopathic medical school is an innovative way to address our needs in rural healthcare. I look forward to seeing what they can do with this great opportunity.”