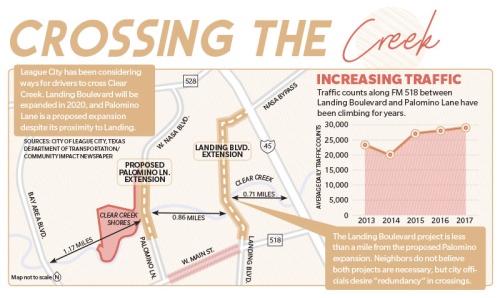 The addition of a proposal to build a Palomino Lane bridge over Clear Creek on League City’s west side to the city’s Master Mobility Plan has not stopped a group of passionate neighbors from fighting the project, even as the Texas Department of Transportation begins planning a Landing Boulevard extension less than a mile away.

Clear Creek Shores subdivision neighbors for years have been pushing back against the city’s proposal to extend Palomino north over Clear Creek. The League City City Council on Nov. 13 voted 5-3 to keep the proposed road project in the city’s Master Mobility Plan, much to residents’ disapproval.

Now the city will have a May election for a $145 million bond—$73 million for drainage and $72 million for traffic—to address problems in the city. Until recently, Palomino was part of the bond, but city officials recommended removing it to keep costs down.

Meanwhile, TxDOT will begin extending Landing Boulevard in 2020 and finish by 2022, officials have said.

Some council members believe Landing Boulevard’s extension could eliminate the need for Palomino’s extension, but city leaders are not so sure. Neighbors do not believe building two bridges so close together is necessary.

Many residents commute north toward Houston or south toward industrial plants, and with Clear Creek running west to east through League City, officials often search for ways to promote north-south connections, he said.

“It’s a classic question: How can we cross the creek to the west of I-45?” Baumgartner said.

FM 518 suffers from congestion as motorists travel to I-45 or Bay Area Boulevard to cross over Clear Creek. A bridge at Palomino could help reduce the number of vehicles on FM 518, he said.

Whiteley and her neighbor Pam Hale believe the project will cost a fortune. Extending Landing Boulevard was originally proposed to cost about $22 million but will now cost $49 million. The increase came from lengthening the proposed bridge, TxDOT officials said.

Neighbors said they have no reason to believe the same will not happen with Palomino, which is estimated to cost $17 million. It is not worth the investment, Whiteley and Hale said.

According to a traffic study by Stevens Technical, by 2040, vehicles during evening rush hour will experience a 14-second delay at the intersection of Palomino Lane and FM 518 if the bridge is built. If it is not built, the delay is 0.4 seconds more at 14.4 seconds.

Neighbors question why the city wants to build a multimillion-dollar project to save motorists less than half a second, but the city sees it differently. If 10,000 vehicles cross that intersection daily, the bridge would save commuters hundreds of hours annually. The bridge could cut seconds from other intersections along FM 518 and FM 528, saving more time, according to the study.

With Landing Boulevard set to be extended over Clear Creek less than a mile east of Palomino, neighbors also do not believe Palomino’s extension is necessary. If Landing and Palomino were both extended, there would be four bridges over Clear Creek—Bay Area Boulevard, Palomino, Landing and I-45—within 3 miles of each other, which is excessive, Hale and Whiteley said.

“This area can’t take all that,” Whiteley said.

“It’s almost like they’re going to squeeze our subdivisions with bridges,” she said.

City officials believe a crossing every mile or so is not inappropriate. Many cities have major crossings less than a mile apart, and it is important cities have “some redundancy” in their transportation layouts, Baumgartner said.

“As you start to approach a mile, it becomes a long way,” he said. “[Adding crossings] provides for a fairly efficient flow of traffic in suburban America.”

Neighbors’ biggest concern is flooding, and they believe building bridges will only make flooding worse. The subdivision is still rebuilding after Hurricane Harvey, Whiteley said.

“We’ve had probably some of the most significant damage in League City [from flooding],” she said.

After a heavy rain Dec. 7, the subdivision severely flooded, according to photos neighbors took of the subdivision. Drainage problems would grow if a bridge were built because the columns act like a dam and retain water, Hale and Whiteley said.

The problem would be doubled if Landing were also extended because the two bridges less than a mile apart could both potentially dam, they said.

“These folks are hanging on bated breath to try to get some relief in a community that was flooded,” Mayor Pat Hallisey, who sympathizes with neighbors, said at the Nov. 13 council meeting.

City officials are aware of the subdivision’s drainage problems and would hash out appropriate design details when necessary to minimize flooding potential, Baumgartner said.

“If we were to build a bridge today, we’re very sensitive to what Harvey-level flows were,” he said. “I’m optimistic that we will further harden our community and homes along the creek with some regional drainage improvements.”

The city recognizes that concern, but if Palomino helped take 10,000 cars a day off FM 518 so other motorists could more easily travel, that makes a difference, Baumgartner said.

Palomino has been a debate for over a decade, resurfacing every few years as the city considers the project. Every time, residents who live near the proposed project, including Whiteley and Hale, have spoken out against it.

Neighbors hired an attorney and expressed to the city and the district their disdain for a bridge, Whiteley said. The city denied rezoning land for the school, and CCISD sued the city, according to the records.

The city compromised by agreeing to rezone the parcel and widen Palomino. CCISD built the high school in 2007, according to the records.

“That was supposed to be the end of it,” Hale said.

However, the city again in December 2009 teased the idea of extending Palomino to alleviate traffic. Again, neighbors balked at the idea, and the city backed off, Baumgartner said.

But the project surfaced against last year. Dozens of neighbors attended meetings about the project and spoke of their concerns. The council eventually voted in favor of keeping the project on the books in case it was ever necessary.

For now, neighbors are happy there is another hiatus on Palomino as it is not included in the May bond.

“I think our priority is Landing today,” Baumgartner said. “We only build a project the community supports.”

But neighbors know the Palomino project is bound to resurface yet again.