Intuitive Machines successfully tests engine of Nova-C lunar lander, which will fly to moon in 2021 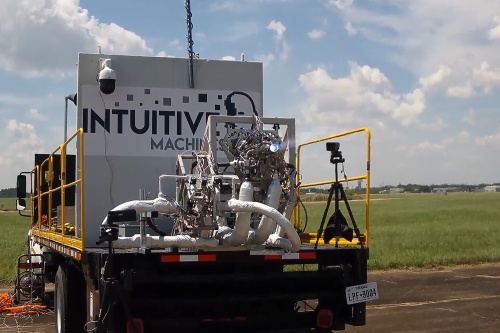 Intuitive Machines on Sept. 4 successfully tested the engine of Nova-C, a lunar lander that will fly to the moon in less than two years.

Intuitive Machines has successfully tested its lunar lander rockets for the eighth time, bringing the Clear Lake-based business one step closer to being the first private company to reach the moon.

Intuitive Machines is developing Nova-C, a lunar lander that will launch to the moon in 2021 to deliver NASA payloads to the lunar surface. The scientific data Nova-C gathers during its 13.5 days of life on the moon will help NASA in its mission to land humans on the moon in 2024, the first time since the 1970s.

On Sept. 8, Intuitive Machines tested Nova-C’s rocket propulsion system for the eighth time at the Houston Spaceport, part of Ellington Airport. This test was the first time the company also tested its reaction control system igniter, which is being developed to support large, human-scale landers for astronauts’ return to the moon, according to a press release.

“We are incredibly pleased with the support we have received from the Houston Airport System and the city of Houston to perform our engine tests at the spaceport,” said Timothy Crain, the vice president of research and development at Intuitive Machines, in the release. “Houston officials have really lived up to the billing of Space City.”

Once in space, Nova-C will separate from the launch vehicle, and the tested propulsion system will allow the lander to reach and land on the moon. The engine’s combustion exhaust will reach temperatures over 2,500 degrees Fahrenheit, and the methane inside the engine will reach over 5,000 degrees, according to the release.

“There’s a narrow range of acceptable performance between underpowered and overheating [and] meltdown,” said Rob Morehead, Intuitive Machines' propulsion lead and main engine designer, in the release. “Plenty of testing is required to determine how to operate the engine safely while maximizing performance.”

Nova-C is capable of delivering at least 220 pounds of space technology and cargo to anywhere on the moon’s surface. On its first flight in 2021, it will carry five NASA payloads and transmit scientific data back to Earth. Intuitive Machines hopes to add additional payloads from other commercial customers for Nova-C’s 2021 mission, according to the release.