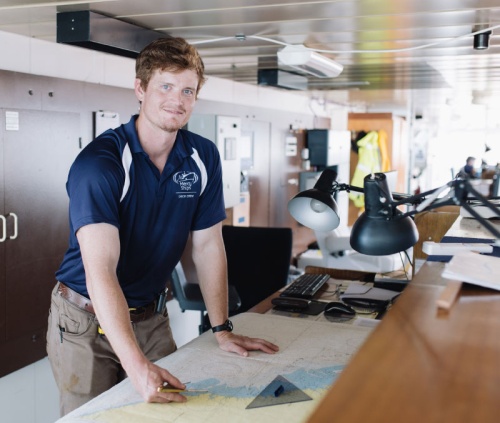 A good man: That is how Africa Mercy Deck Officer Coltan Coleman said he would like to be remembered, and despite his youth his selfless acts are already defining him.

Coleman, 31, is a League City resident volunteering onboard the Africa Mercy, a hospital ship docked off the coast of Conakry, the capital of Guinea in West Africa—but Coleman’s desire to help others started long before his journey aboard the ship.

Coleman was raised in Cuero, Texas, where he worked on farms until he graduated high school. He enlisted in the Marines after graduating because he wanted to serve the country and explore beyond his hometown.

“My grandfather raised me a bit while I was growing up,” Coleman said. “He was a Marine during World War II, and I wanted to get out and see the world.”

The Marines gave Coleman an opportunity to volunteer and travel. He was stationed in Okinawa, Japan, for more than three years, where he learned how to speak Okinawan and volunteered to teach English at a senior center.

He traveled to Bangladesh, where he helped build two schools, and he helped build forward operating bases while serving in Iraq. Coleman said he appreciates his time in the Marines.

“I enjoyed the camaraderie and having purpose and direction. The physical and psychological challenges made me into a better person,” Coleman said.

Coleman moved to League City in 2011 to attend Texas A&M Maritime Academy. He graduated in 2013 and worked offshore supplying groceries and tools to drill ships.

It was during his time in League City that Coleman started to think about volunteering for Mercy Ships.

“League City is such a pristine, beautiful space, and it made me think about all the people that will never get to experience a place like this,” he said.

Mercy Ships specializes in providing free health care services and deploys the largest private hospital ship, Africa Mercy, to developing nations. Coleman knew he wanted to volunteer for Mercy Ships because he shared its goal to help those in need.

“I was always compelled to do it because they have such a great cause,” Coleman said. “I thought about the people who have no access to medical care. They are stigmatized, excluded from society and have such a tremendous disadvantage.”

In August, Coleman sailed on Africa Mercy from Las Palmas, Spain, to Conakry, Guinea. The ship arrived Aug. 11 after a five-day journey. The biggest obstacle while sailing was learning the ship procedures, Coleman said.

Coleman’s duty is to maintain all the fire equipment, but days are filled with responsibilities both on- and offboard.

His mornings begin with breakfast and meetings. Wednesdays are dedicated to praying, and the locals come onboard Thursdays to sing and play drums. Fridays he teaches sailor skills to the children onboard. Every day varies, and “not having a set routine is the routine,” Coleman said.

Every Friday, Coleman accompanies a dentist to a soccer field in town to help people with dental needs.

“I go with the dentist and help organize and provide security, and people come to this soccer field and line up to get checked, and later that day or a day after they’ll have their dental needs taken care of,” Coleman said.

During free time Coleman likes to play board games, go into town, and interact with passengers and patients. He said the most rewarding thing about being on the ship is seeing the patients’ positive attitudes.

“Even if there’s a language barrier they are full of joy, and to them [our work] is a miracle,” Coleman said.

Coleman plans to stay with Africa Mercy for at least one year and encourages others to become volunteers.

“I want people to know what Mercy Ships is doing,” Coleman said. “It’s special. It’s a magical place, this ship.”