Family Promise of Clear Creek builds on hope and self-sufficiency 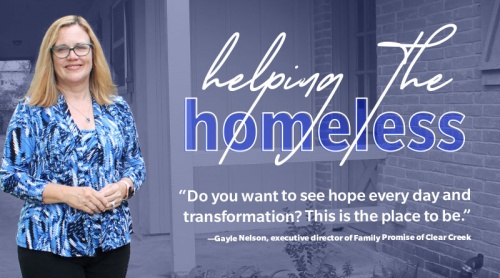 On her first day with Family Promise of Clear Creek, executive director Gayle Nelson helped acclimate a mother and her two sons with the program that helps homeless families.

“As we go through and explain things to her she finally said, ‘I need a moment,’” Nelson said. “She sat down on the couch after we gave her keys to her closet, and she just started crying and said, ‘I’m just grateful we don’t have to stay in the car.’ That was a pretty impactful first day.”

For others struggling with homelessness, Nelson wants them to know they are not alone. Family Promise of Clear Creek helps place homeless families on the road to self-sufficiency.

The faith-based nonprofit partners with 19 churches to bring guest families a number of resources, such as food, shelter, storage and transportation. The facility serves as a day center for families who are not working or attending school. In the evening they are assigned to a host church where they have home-cooked meals and a place to sleep, Nelson said.

“Do you want to see hope every day and transformation?” Nelson said. “This is the place to be.”

Nelson has always had a passion for helping her community. Over a year ago, she started as a part-time program coordinator for FPCC to serve as a liaison between the organization and churches it partners with and interviewed homeless families. In July, she became executive director.

“All of the volunteer jobs that I’ve done, the people that I’ve helped with family service, crisis hotlines and a number of organizations throughout the years—it’s all about strengthening my community, and I have the opportunity to have boots on the ground making that happen,” Nelson said.

After Hurricane Harvey, numbers spiked to more than 4,500 registered homeless children in the Bay Area. FPCC receives nearly 80 calls a month from families looking for help. The organization helps dozens of families through its five-step program that shadows psychologist Abraham Maslow’s hierarchy of needs, Nelson said.

Many homeless families refuse help and remain in the shadows because they fear being separated, she said.

“In many shelters they split up the family. We keep families together, hence Family Promise,” Nelson said.

Nicole Kinstrey and her three-year-old daughter, Kuin, moved to Texas from New York and lived with a friend in an apartment. In August 2017, her friend received a warning letter from management stating Kinstrey and her daughter needed to move out or else they would be evicted, she said.

Kinstrey left and joined the program at FPCC. She graduated from the program in October 2017 with a job and an apartment. One week later, she lost her job. Kinstrey turned to FPCC for help and is now a teacher back on the road to self-sufficiency, she said.

“Through the generosity of Family Promise, they were able to pay two months of my rent until I found a position again,” Kinstrey said.

As the new executive director, Nelson expects to help more families, expand its resources, raise community awareness and serve as a safe harbor and beacon of hope to families in need.

“Homelessness knows no bounds,” Nelson said. “There’s hope, and we are here to help.”