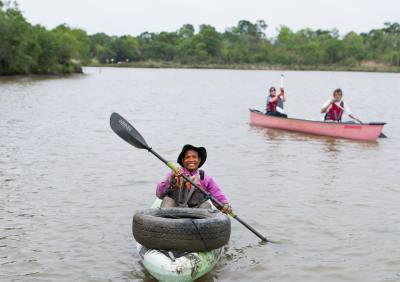 Volunteers work by boat to clean up garbage in Galveston Bay waterways during Trash Bash.

As trash-clearing efforts trend across the country, Bay Area residents are gearing up to spend a day removing garbage from Galveston Bay’s many waterways.

The 26th annual Trash Bash begins at 8 a.m. March 30. Thousands of volunteers will participate in the largest water education conservation event in Texas by collecting thousands of pounds of garbage at several sites across the Greater Houston area.

Since the event began in 1994, over 109,000 volunteers have collected 2,274 tons of trash, 17.25 tons of recycling and over 11,000 tires, according to a press release. The amount collected annually can vary, said Emily Ford, Galveston Bay Foundation volunteer programs coordinator.

“Things like big storm events … like Harvey, you’ll see a spike in how much trash is collected,” she said.

The event is organized by the Houston-Galveston Area Council, but the Galveston Bay Foundation will host Trash Bash cleanups in the Bay Area. Residents will meet at Bay Area Park in Pasadena, and buses will take them to nearby locations along Armand Bayou, including Clear Lake High School, Red Bluff Road and more. Volunteers will work on foot or by boat to collect trash from Armand Bayou and its shores, Ford said.

“We spread people out to what would be a total of 43 miles of the Armand Bayou waterway and bank,” she said.

The event is important to the health of Galveston Bay and eventually improving the overall C grade it has received from the Houston Advanced Research Center, said T’Noya Thompson, foundation report card coordinator.

The litter and trash section of the report card has an I grade for insufficient data. Officials have not been able to assign a letter grade to how much litter and trash are in the bay because it can be difficult to compile and measure such data from different organizations and sources, Thompson said.

“Even though that grade is an I, we know it’s a pressing issue,” she said. “Everyone wants a clean environment.”

Houston could produce about 5.37 million pounds of plastic per day, which is about 1.96 billion pounds per year. The world’s oceans take in about 8 million metric tons of plastic per year, according to the release. Thompson said Trash Bash is a great opportunity to not only learn about pollution but get involved in fixing it.

“[Trash Bash] connects that awareness and turns it into action,” she said. “It really causes you to reflect.”