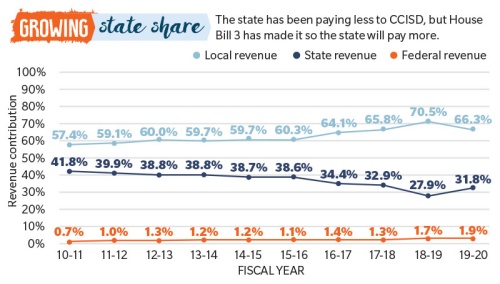 The budget is set at $361.2 million, a few million dollars higher than the FY 2018-19 budget of $346.6 million. The budget has a deficit of about $4 million that the district will make up by pulling money from its capital project fund. However, district officials said they expect to make more revenue during the 2019-20 school year than was budgeted, making the use of $4 million worth of capital projects funds unnecessary, per Paul McLarty, the deputy superintendent of business and support services.

About 66.8% of all new expenditures are related to instruction and will be funneled directly into the classroom. A large part of this percentage relates to salary raises, McLarty said.

HB 3 mandates the district spend at least $3.9 million this year on salary raises for teachers. Under a previously board-approved action, raises will actually total $7.7 million for teachers and $4 million for other staff for the 2019-20 school year. The district’s raises fell between 4% and 9.5%, McLarty said.

Like other Greater Houston-area districts, CCISD is suffering a shortage of bus drivers. The FY 2019-20 budget raised the hourly rate for bus drivers from about $16.83 an hour to $19 an hour, McLarty said.

Still, the district was short about 20 bus drivers the opening week of school, and other staff members had to fill in. If there are not enough drivers, children do not get picked up for school, McLarty said.

Dickinson ISD had a lower starting wage than CCISD for bus drivers and raised rates to $19 an hour, which prompted several CCISD bus drivers to leave. CCISD had to raise rates to compete, which put a $300,000 dent in the budget, McLarty said.

The district will add 44.25 full-time-equivalent staff for the 2019-20 school year, 17.5 of which will be for the new Campbell Elementary School. Another 9.5 are teachers and support staff for special education, which the district is working to improve districtwide.

“If you look at this budget, it’s staff, and it’s salary and benefits,” McLarty said. “That’s the main crux of the budget.”

The administrative cost ratio—the percentage of district expenditures used for administrative positions—for the district is 4.26%. This figure for CCISD has been beneath 5% for 12 straight years; the Texas Education Agency’s recommendation for a district of CCISD’s size is 8.55%, McLarty said.

“So we’re very efficient when it comes to manpower,” he said.

Still, district leaders believes that the state has more work to do.

“They increased the pie, but not by that much,” board President Laura DuPont said.

There is still a wide gap between local and state revenue, but McLarty hopes the district sees the gap move closer toward a 50-50 split, which is a goal at the state level, he said.

“We’ve been working really hard to get those done,” McLarty said. “Anything we can implement early, we’ve already done.”