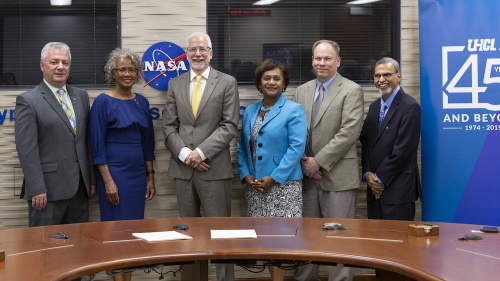 The University of Houston-Clear Lake and Johnson Space Center on Oct. 1 signed the new Space Act Agreement and Annex, reaffirming and expanding their partnership to benefit the community, according to a UHCL press release.

According to the agreement, UHCL and NASA will continue to collaborate on joint research, technology development and educational initiatives through UHCL's undergraduate and graduate programs focusing on science, technology and other topics NASA is interested in, the release reads.


“This is a great day for all of us,” Johnson Space Center Director Mark Geyer said in the release. “We look forward to continued collaboration with UHCL, as we build on our work in low-Earth orbit and pave the way to the Moon and on to Mars as part of our Artemis program.”

UHCL exists because former Johnson Space Center Director Robert Gilruth in 1964 requested that former UHCL President Philip Hoffman establish a permanent institution of higher education accessible to NASA. UHCL opened in 1974 as that permanent institution, and UHCL and the Johnson Space Center celebrated that bond by signing the Space Act Agreement and Annex on Oct. 1, the release reads.


“Together, we will contribute to transforming the lives of students; enriching the careers of UHCL faculty; and providing the NASA staff, engineers, scientists and astronauts opportunities to share their expertise as professional instructors,” UHCL President Ira K. Blake said in the release.