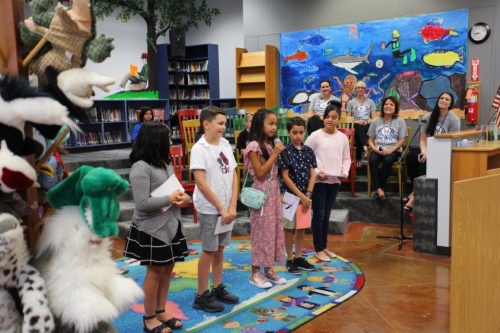 From left to right, fifth graders Camila Garza, Gavin Slaydent, Kaelynn Hester, Andrew Self and Carly Valdivia demonstrate their leadership by sharing information on the history and renovation of Stewart Elementary School with visitors from the community.

Six Clear Creek ISD schools this year have adopted The Leader in Me, expanding the ever-growing list of CCISD campuses that use the social skills-enhancing program.

During the 2016-17 school year, Clear Creek ISD committed to bringing The Leader In Me program to schools. The program, which is grounded in Stephen Covey’s seven habits of highly effective people, began at Falcon Pass Elementary School to "create a culture of empowerment for students, staff and community through character development, academic goal setting and leadership," the release reads.

“Our goal is to grow strong, well-rounded citizens able to lead and contribute to their communities,” Holly Hughes, assistant superintendent of elementary education, said in the release. “The Leader In Me creates tangible pathways for that success.”

At the end of last school year, Falcon Pass Elementary achieved Lighthouse Certification, which designates the school that produced outstanding student outcomes through the program. The certification typically occurs four to five years into program implementation, but Falcon Pass earned the designation after only three, according to the release.

The Clear Creek Education Fund and local PTA organizations invested in the launch of the program at Falcon Pass and Armand Bayou elementary schools.

“We are immensely fortunate to be building relationships with education-focused community partners who are helping fund this implementation,” Clear View High School Principal Monica Speaks said in the release. “Their belief in and backing of what we are doing is developing one future leader at a time."