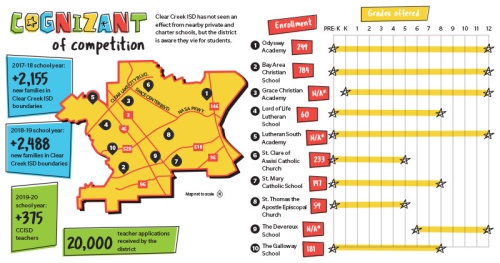 In a school district that leaders said has a positive reputation and is seeing annual student enrollment growth, Clear Creek ISD officials are still aware of the competition private and charter schools bring and are responding in turn.

CCISD officials are working alongside local real estate agents to create an online tool to help parents and new residents learn more about CCISD schools and a training program to certify real estate agents as official CCISD ambassadors. There will be no cost to the district for the tool or program.

Additionally, CCISD last year implemented a grant-funded program to work alongside area day cares to train staff on how to prepare prekindergarten students for attending CCISD. The district has also paid $11,000 for a six-month contract to show advertisements in movie theaters to not only entice new residents about the benefits of CCISD but establish a sense of pride in those already in the community.

Officials said these efforts have their own benefits, but they are also ways for the district to market itself in an area where parents have several options when it comes to education.

“It’s a good message to remind people you’re in a good schools district, [and] here’s what we offer,” Assistant Director of Marketing Eva De Cardenas said.

CCISD officials said real estate agents are often incoming residents’ first look at the district and therefore play a role in who decides to move into CCISD boundaries and send their children to CCISD schools. District leaders want to make sure real estate agents are as informed about CCISD as possible so new residents are getting accurate, useful information about the district.

“They are kind of the front door to the families that are coming to the region,” De Cardenas said.

To that end, the district and real estate agents are working together to create a portal on the district’s website that will have information about each school, including extracurricular activities and sports offered. The portal will include relevant data that goes beyond a simple Texas Education Agency rating or similar score that most new residents do not bother to look into, officials said.

“We have a tendency to just see a rating and create a feeling or an opinion,” said Heidi Hayes, a Homeland Title business development manager helping create the portal. “What we’re trying to design is the idea that CCISD is so much more than looking at a rating.”

Brockway Realty owner Penny Brockway was one of the first real estate agents CCISD officials contacted about the online tool. Brockway knows what kind of information parents want to learn about the district before moving and is helping CCISD include that in the web portal, which should launch by the end of the year, Brockway said.

The tool will include interactive maps, school fact sheets and other data that will go layers deeper than the information parents can find online otherwise. The user-friendly tool will also allow real estate agents to find houses for sale within a certain school’s boundaries if that is where parents want their children to attend, Brockway and Hayes said.

This ambassador program will train real estate agents about CCISD so they can give parents the information they need to decide where they should move to attend schools that meet their needs.

Real estate agents are required to have a certain amount of credited learning hours a year. Agents who complete the class will become official CCISD ambassadors, which gives them a sense of authority when talking to incoming residents about the district, said Hayes, who will teach the course.

This online tool and ambassador program is another way to make sure CCISD is “top of mind” when parents decide whether to send their children to public, private or charter schools or to homeschool them, Chief Communications Officer Elaina Polsen said. There is one charter school, Odyssey Academy, and several private schools within CCISD’s boundaries and more just outside, all competing for students.

CCISD has other partnerships throughout the community to serve potential CCISD families and simultaneously market to them.

Last year, CCISD was awarded a $255,000 TEA grant to start an early-learning initiative. Under the program, CCISD partners with area day cares to provide professional learning for day care staff so they can better prepare pre-K students for daily life at CCISD schools. Officials want incoming kindergarteners to be as ready for school as possible, De Cardenas said.

“That’s kind of marketing us as well … because we hope at some point that child is going to be enrolled in CCISD,” Polsen said.

The district also hosts professional learning sessions for child care workers to learn how to look for early signs of special needs in these pre-K students and what special education services the district provides. At a cost of $19,000 a year, CCISD provides to parents an online tool called ReadyRosie that allows them to do activities with their young children to prepare them for school, Polsen said.

Brockway, a CCISD alumna, was a Houston ISD teacher before she became a real estate agent. When her daughter entered middle school, Brockway moved into CCISD so her daughter could get a great education that would overprepare her for college, as CCISD did for Brockway, she said.

League City resident Tracey Farmer moved from Spring to League City 13 years ago specifically for the school district. She wanted her children to get the best education, and research showed CCISD would meet that need, she said.

“My kids have been able to thrive in this district,” she said. “School districts are No. 1 when looking for a home.”
CCISD ends up being a major selling point for many incoming new residents like it was for Brockway and Farmer. CCISD’s strength is the sense of community it establishes, Brockway and district officials said. The bonds between families and schools are so strong that many families move when school boundaries change so their children stay enrolled in the same schools, Brockway said.

Part of that sense of community comes from CCISD’s efforts to partner with real estate agents, day cares and child care workers. Such partnerships raise community awareness about the offerings of CCISD, which aims to be a “one-stop shop” for education, Polsen said.

“We have a lot of niche audiences we’ve put some real care into developing,” Polsen said. “The more we can immerse ourselves in those environments, the higher likelihood … we would be the first choice.”

While other districts, such as Fort Bend ISD, are seeing an influx of charter and private schools that compete for money and enrollment, CCISD does not have that problem. CCISD enrollment continues to climb, and officials believe it is because the area continues to grow, Polsen said. League City is only halfway built out, and its population increases by an estimated 3,000-4,000 residents per year, City Manager John Baumgartner said, all of which contributes to a steady rise in CCISD enrollment.

Still, officials refuse to get complacent, which is why the district has many community partnerships, Polsen said.

“It goes back to our leadership. [Superintendent Greg] Smith understands that we’re not a monopoly, competition is healthy, and that it’s our responsibility to put out the best product possible, and that’s education,” Polsen said.

Others notice CCISD’s value. Community leaders across the Bay Area consistently laud the district. CCISD has been rated as one of the top places to work in the Greater Houston area for seven consecutive years. Over 20,000 people applied to be CCISD teachers for the 2019-20 school year, and the district hired only 375, CCISD officials said.

“When you have an applicant pool of 20,000 and you only need 375, you’re really picking the top of the top of teachers,” Polsen said.

The strong sense of community is reflected in an advertisement CCISD began running in local movie theaters this summer. The commercial talks about what CCISD offers and how it is set apart, and the goal is to create a sense of pride in the community and pique the interests of new residents.

“From our leaders down, it’s about touching their hearts, and, I don’t know, that doesn’t feel very business-y to me,” De Cardenas said.