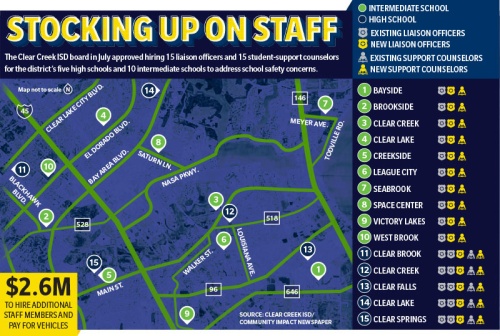 Clear Creek ISD officials are implementing safety changes to prevent violent tragedies after their community was rocked May 18 when a gunman killed 10 people at Santa Fe High School—a mere 15 miles away.

“School shootings happen in other places around the country, but when it happens here so close to home, it hits you even harder,” said Henry Gonzalez, a parent of two CCISD elementary school students and co-chairman of a committee that helped the board come up with safety improvements for the district.

The district school board and staff felt the same shock and horror.

“It’s much harder this time because it was in our backyard,” CCISD board President Page Rander said.

The district’s response was swift.

Parents, students, staff and others quickly congregated to come up with school safety recommendations to help avoid a similar tragedy in any of CCISD’s 44 schools.

Over 800 parents applied to be on the 38-member Clear Creek ISD School Safety Committee. The group met four times in June to come up with its several recommendations, all of which the school board approved in July.

Several of the recommendations are already in effect, and the state Legislature is working on solutions as well.

According to an open records request filed by Community Impact Newspaper, threats to Clear Creek ISD more than quadrupled in the 2016-17 and 2017-18 school years compared to previous years. According to Texas Penal Code Sec. 22.07, a terroristic threat places people in fear of injury and causes a reaction from law enforcement.

Still, officials believe their recommendations will do plenty to help avoid another school shooting.

The most significant and expensive recommendations the board approved included hiring 15 additional school liaison officers and 15 additional student-support counselors.

“The strength of our school district is in the people,” Superintendent Greg Smith said.

High school students on the safety committee expressed concerns with how seldom they get to talk to their counselors. Hiring additional counselors will allow the district to get closer to the state average of a ratio of one counselor for every 450 students, according to the recommendations.

It will take an estimated $2.6 million to hire the 30 additional staff members and pay for vehicles for the liaison officers, Smith said.

The board approved additional facility recommendations, including ensuring all classroom doors can be locked from both sides, increasing the number of controlled access points and decreasing the number of uncontrolled ones, replacing obsolete cameras on campuses and buses, and ensuring law-enforcement officers can remotely access security cameras.

Other recommendations the board approved included requiring students and staff wear identification badges at intermediate and high schools; strengthening the dress code to ban unsafe attire such as trenchcoats; implementing emotional and mental health curriculum so students better understand how to manage emotions, achieve goals and make good decisions; creating an emergency app and website to share school safety information; and increasing drills and training for students and staff.

All told, the district expects to pay at least $4 million of its $350 million fiscal year 2018-19 budget to fully fund the committee’s recommendations. The school board in September will approve a deficit budget and find ways throughout the school year to pay for the safety improvements, Smith said.

“We certainly ask for the patience of our public in order for us to implement all these recommendations over time,” Smith said.

Before the Santa Fe shooting, CCISD had improved many of its schools with extra security after voters approved two bonds. Efforts included putting up perimeter fencing at elementary schools, installing buzzer entry systems at all schools, placing bullet- and shatter-resistant film on entryway windows and more.

Despite the many recommendations the board came up with, it did not recommend installing metal detectors at schools, implementing a guardian or marshal plan, or requiring students wear clear backpacks.

Several parents at a July school board meeting argued in favor of metal detectors, saying they could help catch students trying to bring weapons into schools. About 1,900 people had signed a petition in favor of installing metal detectors, but several signatures were not from CCISD residents or parents, Rander said.

The committee and school board agreed school staff should not be pulled from their teaching responsibilities to search students. They also agreed metal detectors could, ironically, create an easy target for a shooter.

“If we have a metal detector, now the shooter goes over there and there’s now a huge line of potential targets … because everybody’s outside,” Gonzalez said.

The committee was against both ideas. Hiring trained liaison officers is safer than arming teachers or civilians who might not have gone through proper vetting, Gonzalez said.

“There was an overwhelming recommendation that that’s not something parents and teachers should be doing right now,” he said. “The teachers are in there to teach.”

The committee acknowledged there are advantages to requiring students use clear backpacks, but there were concerns about students’ privacy. Students also could easily hide contraband in a clear backpack, group members said.

It is not just the local level concerned with preventing school violence; the Texas Legislature has been studying ways to improve districts’ safety and will discuss ways to help when the legislative session starts in January.

State Sen. Larry Taylor, R-Friendswood, is chairman of the Select Committee on Violence in Schools and School Security. The committee in early August released a final report of policy recommendations to tighten school security, including funding school districts to implement metal detectors, alarm systems, cameras and hardened entrance; funding the training of school marshals and individuals licensed to carry; reviewing the effectiveness of “zero tolerance” policies; considering ways to increase the availability of school counselors; and updating school building codes so best practices are used when designing new school facilities.

Paul, who represents the Clear Lake area, said he is for stricter dress codes, additional training and putting more law-enforcement officers in schools. These changes might not stop school shootings, but they could help slow the problem down, he said.

“People will realize, ‘This is not a place I can go shoot people at random and get away with it,’” Paul said.

It is too early to tell how the Legislature will address school safety, but those campaigning this election season will have plenty of opportunities to hear residents’ concerns before the next session, Paul said.

“I’m sure when we get into session in January, there will be a plethora of ideas and bills and suggestions we’ll be able to pick up and talk about,” he said.
SHARE THIS STORY