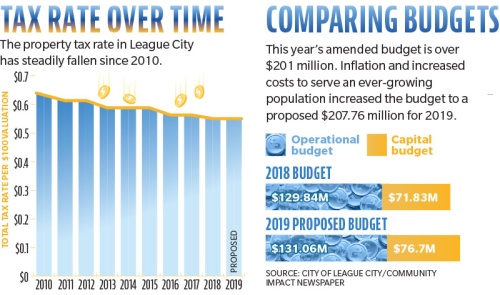 Under the city’s homestead exemption, those whose League City homes are their primary residences can be exempt from property taxes up to 20 percent of their homes’ values. This effectively lowers the proposed 2019 property tax rate to $0.451 per $100 valuation, according to the preliminary budget.

The city has budgeted to hire next year 14.5 new full-time employees, including an assistant attorney, a parks custodian and two paramedics, Baumgartner said.

“Those are the things that drive the creep in the budget,” he said. “Our job is to provide the community with the services and projects that they desire.”

“We live in a great community … and our property values are growing at a rate faster than inflation,” Baumgartner said. “That’s probably the biggest reason we’re able to reduce our tax rate.”

This year, the city projects it will collect $20 million in sales tax, and that amount is expected to grow to over $27 million by 2023, according to the budget.

There is an increasing number of retail opportunities in League City, and more people are buying things in the city. Those repairing their homes after Harvey contributed a lot to the sales tax, Baumgartner said.

The League City City Council will likely approve the budget at its Sept. 11 meeting. It is scheduled to set the property tax rate Oct. 9.
SHARE THIS STORY