Despite hiccups, Exploration Green project on track for 2021 completion 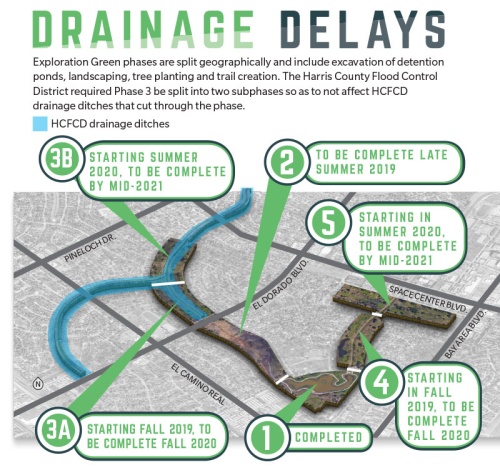 A couple snags and the weather have delayed the construction of Exploration Green, but the project is making good progress, Clear Lake City Water Authority officials said.

Originally, officials expected the project would finish in late 2021. That changed to late 2020 as of early 2019.

“The projects we’ve been able to do have been going faster than we thought,” CLCWA President John Branch said.

However, other delays have pushed the project completion date back to early to mid-2021, he said.

Exploration Green is a former golf course located between El Camino Real, Bay Area Boulevard and Space Center Boulevard that the CLCWA is turning into a detention pond. Once fully built, the pond will hold 500 million gallons of stormwater, protecting an estimated 2,000-3,000 homes from flooding. The project includes tree and wetland nurseries that will be used to fill Exploration Green with plants and wildlife as it is constructed.

Phase 1 is complete, and residents are using its trails regularly. Phase 2, which was originally estimated to be finished this spring, is about 70% complete and expected to be complete by late summer, CLCWA General Manager Jennifer Morrow said.

Phase 2 fell behind schedule when the Houston Airport System ordered work to halt in September because it was discovered the project violated city ordinance by being too close to Ellington Airport. The Airport Board of Adjustment granted the project a variance for work to resume, and the contractors had mostly caught up until recent rain again slowed construction down, Morrow and Branch said.

Contractors are in the process of tying the first two phases together so stormwater drains from Phase 2 to Phase 1. Trails will be constructed after, Morrow said.

Another snag is Phase 3 has now been split into two subphases: 3A and 3B.

The Harris County Flood Control District worried the project would cause one of its drainage ditches that goes from Hwy. 3 east to Phase 3 to back up and cause flooding outside the CLCWA’s jurisdiction. The CLCWA conducted hydrology reports and special engineering to ensure the phase would not affect other entities’ drainage, but the HCFCD required the phase be split and worked on one part at a time as a precaution, Branch said.

Phase 3A, which is south of the HCFCD drainage ditch, was set to start as of early July but has been delayed, likely to September. The CLCWA only recently acquired the work permits it requested in February and now has to rebid the project because it took longer than expected to get the permits, Branch said.

“The city of Houston is very large. It takes a long time to get permits turned around,” he said.

Phase 4 is in final design and review. Contractors will likely begin on that phase in the fall, Morrow said. The phase includes a $500,000 Texas Parks & Wildlife Department grant for hike and bike trails, and the CLCWA must wait for that money to be available before work can begin, Branch said.

Phase 3B, which is north of the ditch, will likely be done at the same time as Phase 5, which is being used to house the project’s tree and wetland nurseries. Nonprofit Trees for Houston has donated 1,000 trees to the nursery, which the authority is using to fill completed phases with greenery. Phase 1 has about 750 trees from the nursery and will have 900-950 when complete, Branch said.

The wetland nursery is growing plants that the CLCWA will place in the detention pond to help clean and improve the quality of stormwater that passes through it, Morrow said.

It will take about a year to fully plant each phase after completion because it is done entirely by volunteers, Branch said.

“We’re up to 9,000 volunteer hours now,” he said. “That is fantastic, and that’s what we really wanted is to get the community involved.”

Not all phases have been bid, but it is expected the final project will cost about $38 million, including buying property, digging, terracing and landscaping. Trails, which are being funded entirely through grants, are not included in that total, Branch said.
SHARE THIS STORY