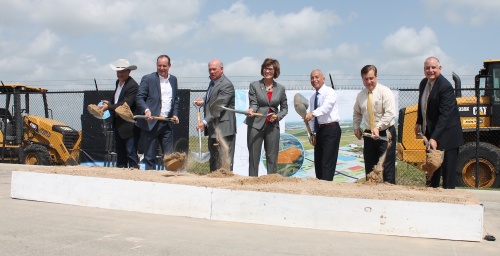 In the early 1900s, the Wright brothers in their Dayton, Ohio, bicycle shop became the first to give humans the power of flight.

Now, more than a century later, in the Clear Lake area of Houston, innovators are preparing for what officials called one of the most exciting times in aviation history.

Aerospace, government, economic and other industry leaders gathered at the Houston Spaceport on June 28 for a groundbreaking ceremony for Phase 1 of development.

The $20 million project will provide streets, water, power and more across 154 acres of what will eventually be home to dozens of aerospace companies that will develop technology to help NASA and commercial aerospace companies reach low Earth orbit, the moon and beyond, said Mario Diaz, the Houston Airport System executive director. Eventually, the Houston Spaceport will be home to commercial supersonic flights capable of flying passengers to far-away destinations in a fraction of the time it takes today.

“There’s a bright future here in Houston, for sure,” said Rob Lowe, southwest region deputy regional administrator of the Federal Aviation Administration. “These are exciting times, I think.”

There are 12 spaceports in the United States. Houston’s was the 10th, and it is in the fourth-largest American city, Lowe said.

“The Houston Spaceport is unique,” he said. “No other spaceport is located in a larger city.”

The spaceport is largely open land connected to the Ellington Airport. Construction crews were on site tearing up the ground June 28. Phase 1 will transform a good portion of the land into a “vibrant, state-of-the-art industrial complex,” Diaz said.

The spaceport’s sole existing building is the Houston Aerospace Support Center, or the Edge Center. Bay Area company Intuitive Machines, which recently won a contract to build and fly a lunar lander to the moon, was the building’s first tenant, meaning the spaceport will be home to the first private company to send a lander to the moon, Diaz said.

“We want to make sure this workforce has the skills, the competency and the training … to move this industry forward,” she said.

Bob Mitchell, the president of the Bay Area Houston Economic Partnership, said the organization is working on six major projects to expand the spaceport. There are more than 11,000 aerospace workers in the Bay Area alone, he said.

Diaz said it is the innovative spirit of those in the Bay Area who will take aviation to levels beyond what was previously thought possible.

“It’s that vision … that has taken us so far in such a short period of time,” he said.
SHARE THIS STORY