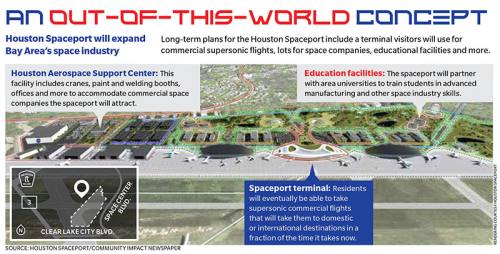 The Ellington Airport in Southeast Houston is home to the country’s 10th spaceport, which officials say will eventually be a takeoff site for space vehicles, allow for commercial supersonic air travel that could take flyers to Europe in a couple of hours, and bring in thousands of spaceport-based jobs.

The spaceport has remained mostly empty land since the Federal Aviation Administration officially licensed it as a spaceport in June 2015, but project officials have a long-term vision to make the Houston Airport System a commercial aerospace industry leader.

The 100-year-old Ellington Airport is a military airport that allows for private takeoffs and landings. Plans for the spaceport would make it Houston’s third international airport, a first for the country, said Bob Mitchell, Bay Area Houston Economic Partnership president.

“Our intent back in those days was to plan for supersonic commercial air travel. In order to do that you have to be a spaceport,” Mitchell said. “We did this to look to the future.”

Southeast Houston, Nassau Bay and the Clear Lake area are known for their dedication to the space industry. The Houston Spaceport will capitalize on that reputation by attracting commercial spaceflight companies to the area to accompany NASA’s presence, Houston Spaceport Division Manager Pete Fress said.

The first part of the spaceport alone is expected to produce 2,400 direct jobs and an additional 3,500 indirect jobs, resulting in over $830 million in economic output into the local and regional economies, Dave Martin, Houston City Council District E council member, wrote in an email.

NASA’s Johnson Space Center, which is supported by over 11,000 employees, conducts research and trains astronauts in the Bay Area. NASA has shown an interest in returning to the moon and reaching Mars, which are much farther away and harder to reach than the International Space Station, Mitchell said.

If NASA concentrates on reaching celestial bodies, that leaves a gap in missions to the International Space Station. That is where private companies are stepping in, and Houston Spaceport officials hope to recruit them, Mitchell said.

The spaceport could attract companies that develop satellites, assemble space vehicles, conduct zero-gravity research, train astronauts and more, Fress said. Already there are 44 aerospace companies in the Bay Area, and with the spaceport more are on the way, Mitchell said.

“People don’t realize that,” he said. “We’re excited about what’s going on.”

Over the last five to eight years commercial spaceflight companies such as Boeing Co. and SpaceX have sprung up with the goal of taking cargo and crews to the International Space Station. BAHEP and HAS officials are in the middle of several confidential projects that could bring similar companies to the Houston Spaceport, Mitchell said.

“We’re marketing that area really hard and heavy,” Fress said. “What we have seen is a high interest in development out there for aerospace and commercial space educational facilities.”

One company is already at the spaceport. Intuitive Machines, which is owned by Steve Altemus, former Johnson Space Center deputy director, is housed in the spaceport’s sole building: the Houston Aerospace Support Center.

Intuitive Machines, which is developing advanced drone technology, soon plans to use the spaceport to design, assemble and test a liquid oxygen and liquid methane propulsion lunar lander NASA could use to deliver payloads to the moon. The company has planned other space-related projects, all of which could soon be housed out of the spaceport, Altemus said.

The spaceport’s effect on the economy of the Greater Houston area, especially the Bay Area, could be huge. Technology advancement developed at the spaceport could easily overlap with Houston’s huge medical and oil industries, Altemus said.

“A spaceport in Houston, which is an industrial city, makes a lot of sense,” he said.

The spaceport’s effect will be contagious, Altemus said.

“When you have a centrally located place with high-technology development going on it becomes a collection, and it becomes an attraction to bring in more talent, more companies, more people,” he said. “I think that all fits nicely together for the community and with the Johnson Space Center here in our backyard.”

The Johnson Space Center’s budget is $4.4 billion, $1.2 billion of which goes directly to salaries in the Bay Area region. NASA’s budget recently increased from $16.5 billion to $20.5 billion, Mitchell said.

The Houston Spaceport is 300 acres of mostly empty land. The goal is to fill it with roads and other infrastructure to incentivize commercial spaceflight companies to locate in the spaceport and work on projects there, Fress said.

The $18.83 million project to add infrastructure to Phase 1 is expected to begin in January, Martin wrote.

On the northeast side of the spaceport, which sits on a southeast portion of Ellington Airport, is the Houston Aerospace Support Center. HAS bought the 54,000-square-foot facility two years ago from a company contracted with NASA to work on parts for the International Space Station, Fress said.

The center is outfitted with incubation space for early-stage companies, paint and welding booths, assembly rooms, offices and a shop floor with cranes and other tools for mass production, Fress said. It could also be a home for universities that want to expand space industry-related education, officials said.

Directly north of the center but outside the spaceport’s property boundaries are NASA’s neutral buoyancy laboratory and the Sonny Carter Training Facility, which NASA astronauts use to train for spacewalks. To the center’s east is a five-story office building space companies could use, Fress said.

The spaceport is in Phase 1 of development, which includes about 90 acres of land in its northernmost portion. The Houston City Council will likely soon approve developing infrastructure that will incentivize commercial aerospace companies to locate to the spaceport, Martin wrote.

Developing infrastructure will be done a step at a time instead of all at once, he said.

“We realize we need to put the infrastructure in to get started, but we really don’t want to minimize the opportunities based on future footprint needs,” Fress said.

“There never was any vision for Ellington to compete with ourselves,” he said.

BAHEP got involved as well and pushed for the spaceport’s creation.

“I think it’s very important that the Houston Airport System has looked beyond and created this vision of what the future’s gonna be for commercial air travel,” Mitchell said. “Imagine what you can do with 300 acres.”

Residents will be able to fly to New York City in 50 minutes. Flying to London will take two hours. A nonstop flight to Australia will take four hours, officials said.

“They are designing and developing these aircraft today, as we speak,” Mitchell said.

It is illegal to fly at supersonic speeds over the United States because of the loud, damaging sonic boom jets make when reaching such speeds. Engineers are designing aircraft capable of creating a “low boom” that would allow for supersonic travel over land, and it will soon be tested out of Ellington.

This fall jets will take off from Ellington Airport, fly over the Gulf of Mexico and reach supersonic speeds. Officials are curious if residents will be able to hear the low boom, Mitchell said.

“They’re not making a big issue out of it because they want to get good, honest public input,” he said.

Commercial space companies will use the same concept to launch space vehicles from the Houston Spaceport that would be capable of reaching sub- or low-orbit heights, including the International Space Station.

The Houston Spaceport is not licensed for vertical launches, so space vehicles will instead launch horizontally, go over the Gulf of Mexico and then rocket off vertically to reach space, officials said.

Spaceport officials in 2015 signed a deal with Sierra Nevada Corp., which is developing the Dream Chaser, a space vehicle that will deliver cargo and crew to the International Space Station. The deal will allow the Houston Spaceport to be one of the sites the Dream Chaser can return to after launching from another location, officials said.

Potential plans for the spaceport include retail areas and hotels.

“When you work a project this big, it doesn’t happen overnight,” Mitchell said. “But the reality is it’s going to happen.”