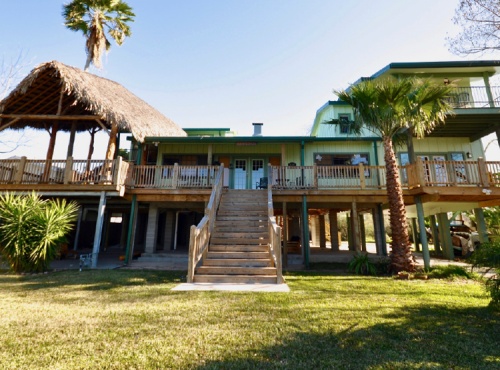 Home elevations are becoming popular in the Bay Area, particularly Nassau Bay, as residents lift their homes to stop flooding.

During Hurricane Ike the Nassau Bay home of Don Matter took on 33 inches of water.

The damage was so severe that Matter, Nassau Bay mayor pro tem, was displaced from his home for eight months, he said.

City officials decided in 2013 to apply for grants on residents’ behalf to elevate houses to bring them out of the floodplain. Matter was one of nearly 100 homeowners who have applied over the years.

“When the opportunity came to raise the house I jumped on it,” Matter said.

Matter’s house was raised 10 feet by 2017, just before Hurricane Harvey. As a result of the elevation Matter’s house took no damage from Harvey despite his street being “a river,” he said.

“Harvey was nothing,” Matter said.

Other Nassau Bay homeowners are following suit, applying through the city for federal home elevation grants. Residents in Clear Lake Shores, another municipality close to the water, are applying through Galveston County to elevate their homes.

Since 2013, 94 Nassau Bay homeowners have applied through the city to elevate their homes. Of those, 61 have been approved, according to city data.

The grants pay for anywhere between 75 and 100 percent of homeowners’ home elevations depending on how prone the properties are to repetitive flooding. Some do not qualify because they have not flooded severely enough, City Manager Jason Reynolds said.

Nassau Bay has about 1,500 homes, and the fact almost 100 homeowners have applied for grants and over 60 have qualified shows there is a serious flooding problem Nassau Bay and its residents are trying to address, Reynolds said.

So far 29 Nassau Bay homes have been elevated. Another five are in the process, and 27 are expected to be elevated starting in January, Reynolds said.

Home elevations can be a slow process. Some homeowners seeing their properties being elevated now applied back in 2013, Reynolds said.

“The fortunate thing for Nassau Bay is that we do have residents that have the resources to lift the homes,” Reynolds said.

Matter said his home elevation cost $285,000, and he had to pay 25 percent. That covered only the actual home elevation; Matter had to pay extra money for the “fancy steps” of adding windows and making the house look “pretty,” he said.

“If you look at my house you will not know that it was ever raised,” Matter said.

Nassau Bay has about 17 vacant lots, many of which resulted from razing homes after they flooded too often. The lot at 1303 Davon Lane was bought by the Harris County Flood Control District and is so prone to flooding that it can never be built on again, Reynolds said.

Seven owners of Leeward Lane townhouses along Clear Lake applied for home elevation grants, but upon inspection officials realized there was no safe way to elevate the homes. Instead they will be razed, and the lots will remain permanently vacant, Reynolds said.

When a home is razed and the lot can never be constructed on again, that property tax revenue falls off Nassau Bay’s tax rolls permanently. But city officials would rather prioritize safety, Reynolds said.

“It’s about what’s best for the homeowners and the city overall,” he said.

In Galveston County the process of applying for home elevation grant money is not so simple but just as slow.

In Clear Lake Shores the city does not apply for home elevation grants on residents’ behalf. Instead the county handles the process, but it is confusing, Mayor Pro Tem Amanda Fenwick said.

Fenwick’s home took on about 9 inches of water during Harvey. She had to tear up about 4 feet of her house to repair the damages, and she was displaced from her home for six months, she said.

In May, Fenwick received a letter from the county saying she might be eligible for a home elevation. She sent in the requested paperwork and has not heard anything since.

“Now it’s waiting game, from what I understand,” she said.

Fenwick is unsure which organization—the Texas General Land Office, the Texas Division of Emergency Management or others—her application is going through, leaving her in the dark, she said.

“It’s so confusing,” Fenwick said. “That’s the frustrating process in all of this.”

“We identified approximately 927 properties in the county that have had some sort of repetitive loss,” Clark said. “A lot of these homes were places that flooded in the past, not just Hurricane Harvey.”

Any city or county can apply for the grant, which is what Nassau Bay has chosen to do, he said.

“Nassau Bay is taking the lead for its individual community where we’ve got the skillset and personnel to address it countywide,” Clark said.

Clark echoed Fenwick’s concerns that the process is frustrating, noting that grant programs tend to be slow. Homeowners keep calling Clark wondering where the process is at, he said.

“If homeowners are frustrated you can just imagine my frustration,” Clark said.

In Kemah, Director of Community Development Nick Haby said he has not noticed an uptick in residents trying to elevate their homes.

The city fared well during Harvey because it is built to handle storm surges. Only about 50 structures took on water, Haby said.

“Many of these structures were already elevated,” he said.

New homes and commercial properties built in Kemah must be at least 1.5 feet above the base flood elevation. Many home- and business owners choose to build above that to allow room for vehicles to park underneath, Haby said.

While state and local officials try to figure out ways to mitigate flooding, home elevations are an important way to keep water out of homes in the meantime and during catastrophic storms, Clark said.

“We’re not gonna be able to keep people from flooding in a Harvey-type of event, but we need to put together a holistic approach to minimize the impact of a storm of that size and reduce damages best we can,” he said. “It’s a challenge that we’re continuing to work through to continue to provide flood mitigation for the residents of Galveston County.”

Arkitektura in Kemah is one of several area contractors that does home elevations.

Owner Phillip Contreras said home elevations are getting more popular since Harvey—so popular that Arkitektura does only home elevations right now because there is enough work to keep the company busy, he said.

Before Harvey the company did about 12 home elevations a year, Contreras said.

“But after Harvey we’ve done about 70 home elevations in the Houston area,” he said.

Arkitektura begins a home elevation by digging 2-foot-by-2-foot holes around the perimeter of a house. Crews then use the holes to excavate tunnels under the concrete slab the house was built on, Contreras said.

Contractors then push segmented pilings under the house, he said. The pilings create structural stability so the house will not shift during or after elevation, according to Arkitektura documents.

Next, crews place several jacks on the pilings and use a unified hydraulic jacking machine that controls them all to slowly lift the house. Depending how high it is lifted the process takes a day or two, Contreras said.

The jacks lift the house completely level to avoid stressing the home or cracking interior walls, according to the documents.

Then contractors form new grade beams and pour concrete to lock all the pilings in place and build columns on top of the grade beams to connect to the elevated home.

In Nassau Bay at least three of an elevated home’s four sides must be covered, so contractors might built walls to fill the gaps between the grade beams and elevated home. Flood vents are installed so stormwater can flow through, Reynolds said.

No such requirements exist in Clear Lake Shores, he said, so many homes are on stilts with no walls around the perimeters, giving them a beach vibe.

“It really depends on how far they wanna take it and how detailed and nice they wanna make it,” he said.

Matter raised his home higher than necessary to be able to park underneath. He said the process was worth the cost, considering his property value has increased and his flood insurance rates are a fraction of what they were.

“If I flood now the whole city’s is in trouble,” he said.