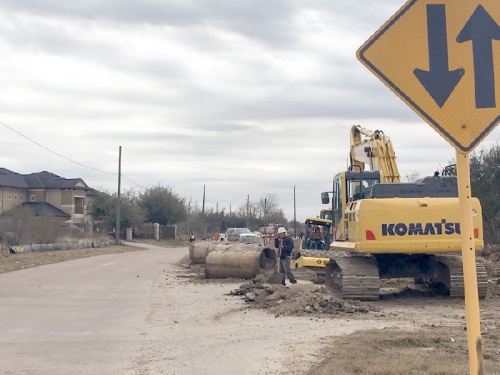 Work wrapped up on a Huffmeister Road extension project in Harris County Precinct 4 in 2018.

Harris County commissioners voted 4-1 at a July 30 meeting to broaden the funding sources at stake in an ongoing mobility needs assessment in the county to include about $120 million in annual toll road revenue and about $390 million in funding that remains from a $700 million mobility bond that passed in 2015.

The study, which county officials hope to have completed by March 2020, will be used to determine how mobility funds are split across the county's four precincts.

The assessment has been championed by the court's three Democratic members—County Judge Lina Hidalgo, Precinct 1 Commissioner Rodney Ellis and Precinct 2 Commissioner Adrian Garcia—who said the way mobility funds are currently split among the county's four precincts is too arbitrary and unfair to Precincts 1 and 2. The assessment will make the process more data driven, Hidalgo said.

Until the assessment is completed, the resolution also calls for temporarily splitting mobility funding evenly across each precinct. A similar measure was passed by the court earlier in July regarding sales tax revenue the county receives from the Metropolitan Transit Authority of Harris County.

Unlike the METRO funds, the toll road funds have already been distributed for fiscal year 2018-19 and will not be affected until the next fiscal year begins in March, officials said.

"The motion does not reallocate funds; it merely says that the mobility funds will all be part of the analysis that's being done," Hidalgo said.

Approximately $250 million in bond funds that have already been allocated are also locked in. However, any additional bond fund requests made by a commissioner before the study's completion will be subjected to an even split across precincts.

Precinct 4 Commissioner Jack Cagle was the only commissioner to oppose the measure, but both he and Precinct 3 Commissioner Steve Radack expressed concerns about the potential redirection of funds away from their precincts. Cagle cited similar arguments made before the METRO funding vote, including that Precincts 3 and 4 are where the majority of growth is taking place.

"To, at this time, strangle the growth areas of the county and to divert [funding], midseason, without a chance of having public input and discussion and debate is not good stewardship," Cagle said at the July 30 meeting.

Cagle also pointed out Precinct 1 had more than $100 million in mobility funds leftover at the end of FY 2018-19 that rolled over. Precincts 2, 3 and 4 had an estimated $39 million, $30.5 million and $45 million in funds roll over, respectively, according to budget documents.

Cagle said he did not oppose the study, which he said would confirm the needs of Precinct 4. However, he requested a separate motion that would require the county engineer's office to have completed the study prior to the next budget cycle and would remove language about evenly splitting funds prior to the study's completion.

In an Aug. 1 interview, Radack said the idea of moving funds out of Precincts 3 and 4, which largely cover unincorporated Harris County, ignores growth projections and the role the city of Houston is supposed to play in funding mobility projects within the city.