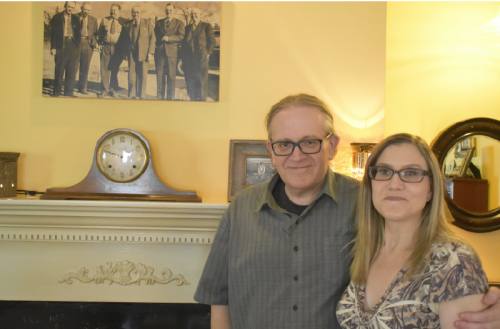 Renfro and Sandy Lesley stand next a photo they restored of Renfrou2019s family.

Renfro and Sandy Lesley began photo restoration as a hobby in 2013 after finding boxes in their parents’ houses filled with old family photographs, some of which dated back to the 1800s.

“After looking at them, many of the colored ones had turned purple and red; things were falling apart; and the black and whites were not any better,” Renfro said. “I had always heard about using Photoshop and stuff like that to restore old pictures, and we started playing around with it.”

After about a year and a half of practice, they officially started Heritage Photo Restoration and Genealogy in 2015 when requests began to increase.

“It just suddenly blew up on us, and it became a much bigger deal than we ever thought it was going to be,” Renfro said. “It’s much more than a hobby now.”

Sandy, who came up with the business’s slogan, “We’re Restoring Yesteryear,” said many clients have emotional attachments to the photos they bring in, and many of them come with a story.

“People like to relive those memories,” Sandy said. “They like to have them brought back to life.”

Prices depend on the amount of damage and how difficult the restoration process might be,  typically starting at $59 and going up to $300, according to Renfro.

The Lesleys also provide digital conversion and printing services, offering several varieties of high-quality paper and even on materials like wood and canvas.

Renfro said many of the  photos their clients bring are the only copies they have of some family members, and it is not unusual for people to cry after seeing the finished result.

“It’s such a wonderful feeling when that happens that it’ll put you almost on a high for a couple of days because you’ve really brightened somebody’s life,” Renfro said. “A lot of the time, they’ll see things that they haven’t seen in maybe 75 years.”