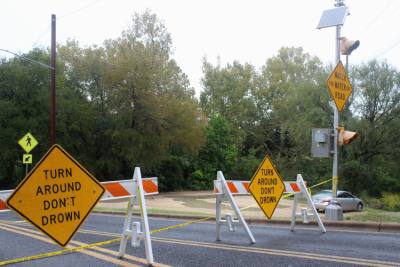 Work on the MoPac express lane project finished in March. The project added one managed-toll lane between Parmer Lane and Cesar Chavez Street, which is variably priced. The final completion does not include a separate approximately $4.5 million project that McCarthy Building Co. is finishing, which includes work on the sound walls by the intersection of MoPac and 45th Street. That work is scheduled to finish by July.

Crews are scheduled to demolish and rebuild the St. Johns Avenue bridge over the I-35 main lanes beginning in June. During the long-term closure, all vehicles on St. Johns will turn right onto the I-35 frontage roads and access either the US 183 or US 290 U-turn to access St. Johns on the other side of I-35. The new bridge is scheduled to open in the fall.

Safety improvements at I-35 and Braker Lane

The city of Austin began construction in mid-January on safety improvements that include adding a raised median on Braker Lane west of I-35 to manage turn movements, extending the turn lane for vehicles turning left onto the northbound I-35, frontage road and adding new sidewalks and high-visibility crosswalks. City officials expect construction to wrap before the end of June.

TxDOT will construct a diverging diamond interchange, in which vehicles cross over to the opposite side of the road to facilitate more efficient turning movements. TxDOT sent the project out to bid in April. The project also includes adding turn lanes at the intersection of Parmer Lane and North Lamar Boulevard.

City staff is finalizing design plans for improvements between Spicewood Parkway and US 183, according to city of Austin officials. After completing the final design, the city will begin the permitting process this summer. The permitting process is expected to take approximately one year to complete.

A bridge on Spicewood Springs Road that experiences frequent flooding will likely begin reconstruction by summer 2020. Three reconstruction plans that differ in construction cost, timeline and added detours were open for public review and comment through early May.

A second community meeting to preview the preliminary design to be ultimately selected by the county is expected to be held in August.

Capital Metro announced in late April that it will begin running its first fleet of electric buses before the end of 2019. The transit agency also announced it started the demolition of the former Serta Mattress warehouse, located just south of the Capital Metro North Operations campus at 9315 Old McNeil Road.

City crews are working on several projects along Burnet Road that will make the corridor safer for pedestrians and cyclists.