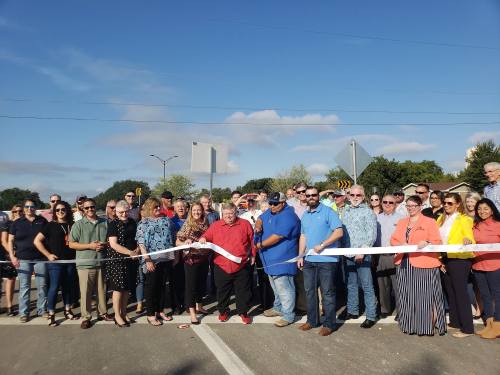 The city of Georgetown celebrated the opening of the Rivery Boulevard and groundbreaking of Northwest Boulevard Sept. 13.

The city of Georgetown celebrated the completion of the first phase of the Rivery Boulevard road project and the groundbreaking of Northwest Boulevard extension project Sept. 13.

“These new corridors are critical to maintaining mobility because that is the No. 1 challenge in Georgetown right now,” Georgetown Mayor Dale Ross said.

The Rivery and Northwest projects provide an alternate to Williams Drive, which is one of the busiest roads in the city, Ross said.

When complete, Rivery will extend from the north end of the existing Rivery at Williams to Northwest. The final project includes four lanes, a divided median and two roundabouts. The road is now open to the first roundabout at the intersection of Park Lane, Ross said.

The construction cost for the project is $5.1 million and approved by voters in the 2015 transportation bond election, Ross said.

The Northwest project reconstructs the road from Fontana Drive to Austin Avenue and includes a new bridge over I-35, which will be a new east-west connection over the interstate and an alternative to Williams, Ross said.

The construction cost for the project is $8.2 million and was approved by voters in the 2015 transportation bond election, Ross said.

Georgetown was named the No. 7 fastest-growing city of its size in the country in 2018, according to the U.S. Census Bureau. The city’s current population within the city limits is about 75,000—which has increased by 56% since 2010, Ross said.

“We never set out to be one of the fastest-growing cities in the country,” Ross said. “Frankly, people are choosing Georgetown because of the quality of life we have here.”