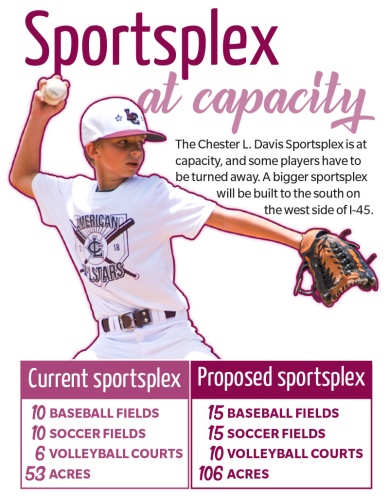 League City officials have struck significant economic development deals in the past, but officials say they pale in comparison to an agreement to build a cultural community center along I-45.

According to a predevelopment agreement signed Oct. 30, Western Spherical Developers is poised to turn the existing Chester L. Davis Sportsplex into an entertainment hub that will be home to a convention center, amphitheater, arenas for professional sports, hotels, restaurants and more, said Scott Livingston, League City’s director of economic development.

As part of the deal, the developer will start as early as February building a new, bigger sportsplex on League City’s west side, giving the users of the existing cramped facility more flexibility when practicing and competing, Livingston said.

If things go according to plan both projects will happen without costing taxpayers a dime. In fact the developments could end up relieving taxpayers, officials said.

Western Spherical Developers plans to turn the existing sportsplex at Hwy. 96 and I-45 into Epicenter League City, an entertainment hub that aims to attract regional visitors and generate additional property and sales tax revenue for the city, Livingston said.

The main attractions, or anchors, for the hub are the convention center and amphitheater, both of which will be able to host conferences, musical performances and professional sports, including baseball and hockey, Western Spherical Developers President David Miles said.

Those anchors will attract other developments, such as offices, shops, restaurants and hotels, all of which will work together to make the hub a destination for League City residents and regional visitors, Miles said.

“The name of this game is to keep events in this project so [visitors] will shop and eat in the hotels and spend money in League City,” he said.

“Instead of having leakage now we have a surplus,” he said.

The city has struck similar economic development deals in the past, such as the creation of Pinnacle Park and South Shore Harbour Resort and Conference Center.

But Epicenter League City has the potential to put the city on the map and take it to the next level in terms of future growth, said David Hoover, League City’s director of planning and development.

“This thing is really gonna blow all those things out of the water. It’s the kinda thing that, we believe, will put us into that next phase with the A teams, the big leagues,” Hoover said. “The word I used is ‘game changer.’”

“It’s our goal to not have any of the city’s money in it,” Hoover said.

include UTMB building offices and living quarters for its staff along the perimeter of Epicenter League City.

As part of the deal Western Spherical Developers will get some return on its investment. Under House Bill 2445, which the Texas Legislature passed in June 2017, the city will receive a reimbursement on some state taxes as a result of the new development, and it will forward that refund onto the developer, Hoover and Livingston said.

Pending a development agreement that should be signed next month, work on the hub will be underway within a year, officials said.

Not only will residents get a new entertainment hub, but those who use the Chester L. Davis Sportsplex will see an upgrade as well.

Because Western Spherical Developers is building at the site of the sportsplex, the developer will build a new, bigger sportsplex on Ervin Avenue on the west side of I-45. The new sportsplex will be built before the existing one is demolished, officials said.

“It’s most important to us to have [no] interruption to the youth sports [so] they are able to seamlessly grow into the new location,” Miles said.

When asked why Western Spherical Developers chose the spot it did for its development despite the fact it was the site of a sportsplex, Miles said it was their top pick.

“League City was always on our radar,” Miles said. “This location kept coming back as our first option.”

Presidents of athletic leagues that use the sportsplex are excited for the new facility. The current sportsplex is cramped and outdated, they said.

Philicia Stem is the president of League City Little League. With 800 children on dozens of teams that can use only four baseball fields Stem has to turn away anywhere from 20-40 children who want to play each season. There is not enough room to accommodate everyone who wants to play, Stem said.

“I just hate turning them away,” she said.

Additionally, the availability of only four fields has led to scheduling conflicts on game days. The new sportsplex will allow League City Little League to use eight baseball fields, effectively doubling how many the league uses now, Stem said.

“Obviously it’s gonna take care of the kids we’ve had to turn away, … and it’s gonna allow us to schedule the games better,” she said. “It just gives us a little bit of a safety net.”

Darren King is the president of the southern division of the Houston Dynamo/Dash Youth Soccer Club. He also has noticed cramped conditions, and some of the soccer fields his athletes play on are not up to regulation. The new sportsplex will fix those problems, he said.

“The size of this new facility is gonna open up some space,” King said. “There’s a lot more fields.”

Despite the apparent benefits the developer and city officials are touting not everyone is excited about Epicenter League City or the new sportsplex.

Some residents openly fear the new development will increase traffic to League City. Mobility issues are one of residents’ greatest concerns, according to a recent citywide survey.

Hoover expects Epicenter League City will increase traffic, but that is the goal, he said. League City is growing, and the objective is to draw more visitors in, Hoover said.

Other residents are concerned Epicenter League City will lead to more drainage issues, another huge problem in the city. Replacing dirt-and-grass fields with concrete and steel could lead to more flooding chokepoints, residents have said.

“This is not gonna work,” resident Harold Powell told city officials during a recent meeting. “You’re gonna have people bailing out of this community like you’ve never seen if you keep this up.”

Miles said Epicenter League City will be pedestrian and bicycle friendly to offset traffic congestion and will include “green infrastructure” to help mitigate drainage issues.

“Those definitely are a priority on our list,” he said.

Stem has heard some parents complain it will take longer to get their children to practice at the new sportsplex because it is farther south than the existing sportsplex. The new sportsplex will still be located near the interstate, Stem said.