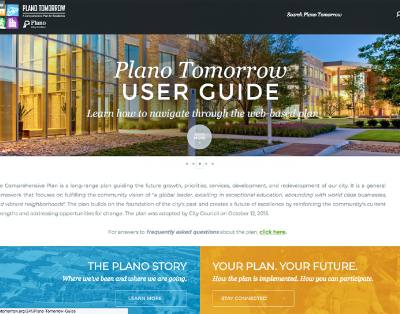 The website for Plano Tomorrow explains some components of the plan, which has been challenged in court.n

A Texas appeals court ruling in February displeased both sides in the lawsuit: the city of Plano and the group of residents trying to dismantle its comprehensive development plan, Plano Tomorrow. The court dismissed some claims against the city while leaving intact the lower court’s jurisdiction to compel the city secretary to present a referendum on the plan to the City Council.

Both sides in the legal challenge, which began in early 2016, have asked the Supreme Court of Texas to review the appeals court’s ruling. The city continues to operate with Plano Tomorrow as the foundation of its zoning. The group suing the city has claimed this violates the city charter.

As of this paper’s print deadline, the Supreme Court of Texas had not informed either side whether it plans to formally hear the petitions but had expressed initial interest in the case by accepting initial briefings from the parties. Attorneys for the city and the group suing it expect it could be weeks or months before they hear back.
SHARE THIS STORY