With funding plan in hand, DART eyes next steps for Cotton Belt line 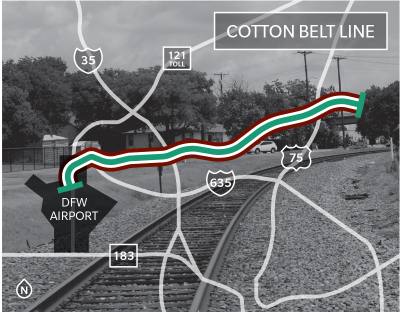 Prospects for a 26-mile suburban passenger rail line that would run through downtown Plano were bolstered in September when Dallas Area Rapid Transit officials approved a funding plan for the $1.1 billion project. The east-west rail line would run from Plano to Dallas/Fort Worth International Airport.

DART officials have begun to present potential stations and rail alignments as board members representing the agency’s various member cities debate the merits of including certain proposed stations that are expected to have lower traffic counts.

Agency staff members are drafting an environmental impact statement that will be finalized in the spring and eventually undergo review by three U.S. government agencies. Construction is expected to begin in 2019, according to a DART spokesperson. Officials expect the project to be operational in 2022.
SHARE THIS STORY