City and school district leaders are working together to ensure a smooth recovery for residents affected by the Oct. 20 tornado.

Cleanup efforts began mere hours after the tornado touched down. As of press time, most debris had been cleared, but repair and reconstruction of damaged property had only just begun.

A summary of the damage in Richardson and next steps were presented by Deputy City Manager Don Magner at the Oct. 28 City Council meeting.

“We stay very mindful of the folks in our community who were impacted by this,” he said. “They weigh heavy in our minds and in our hearts. Everything we do here is to reduce the impact on them and make this as manageable as we can.”

The tornado that struck Richardson was one of 10 that occurred in North Texas that night, according to a report by the National Weather Service in Fort Worth. Its path from Dallas to Richardson stretched nearly 16 miles.

All in all, the Insurance Council of Texas estimates the cost of insured damages from all 10 tornadoes at $2 billion, making this event the most costly tornado loss in Texas history.

The storm entered Richardson at 9:21 p.m. and cut through the southeast corner of the city before crossing into Garland at 9:30 p.m. During those nine minutes, 949 structures were affected, and thousands were left without power, Magner said.

The intensity of the winds ebbed and flowed, but at its peak, the tornado was categorized an EF3, the fourth-highest ranking possible on the six-step Enhanced Fujita Scale.

“What that really means is that at some point during the almost 16 miles that the tornado traveled through North Texas, it hit winds of 140 miles per hour,” Magner said. “We believe here in Richardson, that happened at least one time.”

Excluding the signal at South Bowser Road and Centennial Boulevard, all traffic signals were back up and running by Oct. 24, Magner said.

THE WORST OF THE DAMAGE

Just a few short hours after the storm had passed, the city began assessing the 3,117 properties located in the tornado impact zone. Staff determined that 266 properties sustained minor or major damage, while 12 were completely destroyed.

The worst of the damage occurred near Centennial and Bowser.

Resident Jerry Cern said he knew something was wrong when he felt a pressure in his eardrums.

“The debris was raining out of the sky,” he said. “It was here and gone.”

Down the street, Jerry’s neighbor Cindy Dorsay said she had only seconds to grab her dog and move into the bathroom before the tornado hit. An hour after the storm blew through, moisture from the rain caused her roof to cave in.

“It was terrifying—I’ve lived through a lot of stuff,” she said.

Remarkably, no one was injured or killed by the tornado.

“The only emergency vehicle we didn’t see last night was an ambulance,” Cern said. “Apparently, everyone made it out by the hair of their chinny-chin-chin.”

The fire marshal was responsible for determining whether residents could reenter their homes. Fifty-four homes, as well as all 196 units that comprise Cutters Creek Apartments, were deemed uninhabitable. The city issued some of those residents hotel vouchers while more permanent accommodations were found, Magner said.

The storm hit especially close to home for Council Member Ken Hutchenrider, who was displaced in September 2018 when the failure of an underground water main flooded his home in northeast Richardson.

“Just know that every day is better, and eventually, one day, you’ll wake up, walk back into your home, and it will all be put back together,” he said at the Oct. 28 meeting. “And you’ll think, ‘Wow, how did I survive that?’”

While most RISD facilities went unscathed, 160 students were initially displaced from their homes as a result of the storm, according to the district.

“We are so fortunate that none of our facilities had serious damage, but the families go home to nothing,” Superintendent Jeannie Stone said at an Oct. 28 board briefing.

Students who are homeless because of the tornado are protected under the state’s McKinney-Vento Homeless Assistance Act, Deputy Superintendent Tabitha Branum said. This secures their enrollment status and provides resources, such as transportation, she added.

“Our biggest challenge is making sure all of these families know that there are some supports and protections they are guaranteed under the McKinney-Vento Act and making sure we get that information out,” she said.

The Network of Community Ministries, a nonprofit serving RISD residents, stepped in to meet the needs of displaced students, Stone said. As of Nov. 7, 324 families had been served and $350,000 in donations had been collected, according to Network Marketing Director Tina Floyd.

Stone said the district will request waivers from the state so that students do not have to make up the two days that schools were closed.

As of Nov. 12, RISD estimated its total damage and repair costs at about $347,000, according to Assistant Superintendent Sandra Hayes. The total is not enough to meet the district’s insurance deductible, so a claim will not be filed, Hayes said.

To reimburse costs, the district is exploring all disaster relief options, Stone said. Any costs not covered through assistance will be incurred by the district, she added.

Leaders of both the city and school district said the community should prepare for a lengthy recovery period.

“A lot of this will be with us for a while,” Magner said.

In an effort to expedite the process, the city is waiving building fees for tornado-related construction, utility reconnection fees and container fees for demolition and debris removal, Magner said.

“We want to do everything we can to help these folks who have been impacted stay on schedule,” he said.

Once properties are reassessed, residents can expect a new tax bill that reflects a prorated amount. If property taxes have already been paid, refunds will be issued, Magner said.

Disaster declarations allow the city and school district to seek federal financial assistance; however, none has been made available thus far. In absence of help from the federal government, both entities will need to come up with a plan for how to pay for the damage. Magner said the city is evaluating provisions in Senate Bill 2 that could provide funding avenues in the event of a natural disaster.

Two days after the tornado struck, representatives from the Federal Emergency Management Agency toured the damaged area. As of Nov. 13, the city was still awaiting word on whether or not they will receive federal assistance, according to the city manager’s office.

On Nov. 14, the U.S. Small Business Administration announced that homeowners and renters affected by the storm are eligible to apply for low-interest federal disaster loans of between $200,000-$400,000 for repair to their property. Eligible businesses and nonprofits may receive loans of up to $2 million, according to the city. These funds will help pay for losses not fully covered by insurance or other means.
Tags: Oct. 20 tornado , Richardson tornado , Don Magner , Mayor Paul Voelker , city of Richardson , Ken Hutchenrider , Superintendent Jeannie Stone , RISD , Richardson ISD
SHARE THIS STORY 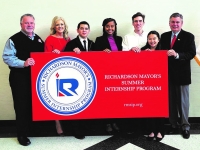