UPDATED: All Richardson ISD students affected by the tornado will return to school Wednesday, Oct. 23 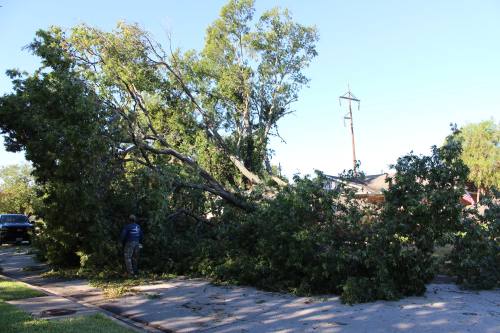 Down trees litter the Richardson Heights neighborhood the morning after the Oct. 20 tornado. Nearby Dover Elementary School remained closed Oct. 22.

Editor's note: This story will be updated as new information becomes available.

Power has been restored to all but one Richardson ISD school as of Tuesday evening , according to a release from the district.

The only school still without power is Richland Elementary School. Starting Wednesday, students from this campus will be temporarily relocated to the RISD Professional Development Center, 701 W. Belt Line Road, Richardson, the district's statement said. School will resume at its normal time of 7:50 a.m.

Power has been restored at Audelia Creek, Dover and Stults Road elementary schools as well as Hamilton Park Pacesetter Magnet, a RISD spokesperson said. Those schools will reopen Wednesday, Oct. 23, and operate on a normal schedule, the spokesperson added.


Some Richardson ISD schools remain closed after tornado due to power outages
Posted at 9:32 a.m.

Those schools are Audelia Creek, Dover, Richland and Stults Road elementary schools, Christa McAuliffe Learning Center and Hamilton Park Pacesetter Magnet, according to a news release from the district.

Reopening of the schools will depend on how quickly power can be restored. An estimated timeframe is currently unknown, the release stated.

“Our primary concern with all decisions this week has been and will be the safety of our students, staff and families," Superintendent Jeannie Stone said in a statement. "Our facilities and central employees are working hard to ensure our schools are safe for teaching and learning to resume."

Schools hit hardest by the storm included Berkner High School and Springridge Elementary School, according to a district spokesperson. Those campuses sustained broken windows and damage to rooftop heating and air conditioning units, the spokesperson added. Both campuses were open Tuesday.

School buses are operating on a limited basis as access to the transportation storage facility is limited, according to the release.

As of Monday evening, high school athletic events happening Oct. 22 had not been canceled; however, the district noted that the events could be postponed based on unforeseen transportation or safety concerns.