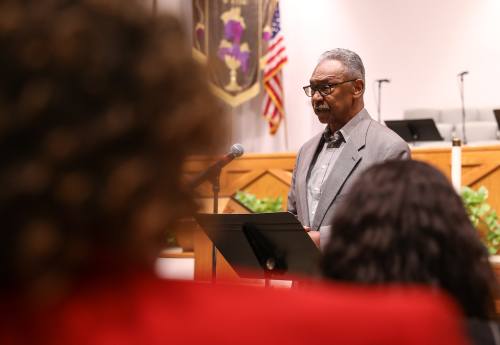 Former RISD trustee David Tyson Jr. opened the forum. The move to a single-member district electoral system is the result of a yearlong negotiation between the district and Tyson.

Candidates for Richardson ISD’s board of trustees gathered at Hamilton Park United Methodist Church for a forum on Oct. 14.

Former RISD trustee David Tyson Jr. opened the forum. The move to a majority single-member electoral system is the result of a yearlong negotiation between the district and Tyson, who claimed at-large elections favor white candidates and discourages minority candidates from seeking election.

Now, five of the district’s board members will be elected by voters living in specific districts. Three of those five single-member districts will be voted on in the Nov. 5 election. One race is uncontested.

Brewer Attorneys & Counselors, Tyson’s lawyers in his case against the district, and the North Dallas Suburban Alumnae of Delta Sigma Theta Sorority Inc., hosted the forum.

“This is really a historical time for Richardson Independent School District under this new five-two model,” said Lacy Durham, a North Dallas suburban alumnae and monitor at the forum. “It’s an opportunity for us to be more reflective of our diverse community.”

Candidates at the event included Vanessa Pacheco for District 2, and candidates Taler Jefferson, Regina Harris, Sakennia Reed and Patricia Price Hicks for District 4. Incumbent Eron Linn, who is running for re-election in District 2, was not in attendance.

Questions focused on willingness to dedicate time to the position of trustee, involvement and relationships with RISD schools, and diversity and inclusion at all levels of the district.

In regards to increasing parental involvement in schools, Jefferson spoke about her current and past work with advocacy groups and how that can lead to involvement.

“If we advocate and really express to the parents how important it is to be involved with every aspect of their child’s life—they see us, and I really do think that if they see someone who looks like them and maybe they will be a little bit more willing to get involved,” she said.

Harris said she believes trustees are supposed to be hands-on in a number of ways.

“I have to be in the classrooms—hearing what they’re saying, and seeing what they’re doing—letting those students and parents see that I am visible; I am serious; and I want to make a change,” Harris said.

To increase student inclusion in higher-level or alternate courses, Reed suggested the creation of a student advisory board as well as a full-day pre-K program for all students.

“We think we know what they want,” Reed said. “But I think the best thing we can do is just hear from the students about what it is that they want, and programs they would like to see, and what other career-exploration programs they’d like to have.”

Hicks emphasized the need for alternate course options for students who choose not to pursue college. She suggested looking to other school districts to pick the right courses.

“We need some other programs, and we need them soon because we are losing young people,” Hicks said.

Pacheco closed the forum by commenting on the value of the minority viewpoint.

“I think it’s a good example that as minorities, we ask different questions than the current board of trustees,” Pacheco said. “We look at life differently. We look at the concerns of our families.”

Another topic of discussion was candidate understanding of and compliance with the Texas Open Meetings Act. In a separate lawsuit, Tyson claimed his fellow trustees repeatedly violated this act. That complaint was also settled in January.

Early voting begins Oct. 21 and runs until Nov. 1. Election day for the RISD board of trustees and state constitutional amendments will take place Nov. 5.