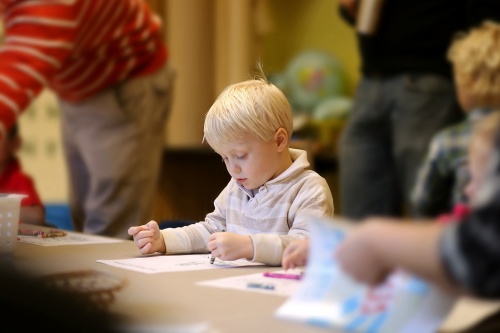 Richardson ISD is one step ahead of a state law requiring an expanded pre-K program. But there are still hurdles to clear in the journey to full compliance.

The district vowed to convert its existing half-day seats to full-day prior to the signing of House Bill 3 in June. Under that new law, all public school districts in Texas are now required to offer free, full-day pre-K to qualifying 3- and 4-year-olds, and the state is kicking in major dollars to ensure the program is a success.

“This is something that has been on RISD’s legislative agenda for several sessions now,” Deputy Superintendent Tabitha Branum said. “The fact that [the state has] provided this full-day funding will allow us to do great things for kids.”

Currently, a child qualifies for RISD’s program only if he or she meets certain language and income requirements. But district leaders say their goal is to make the program universal by 2025.

The first wave of RISD’s full-day program began in August. The district initially budgeted five years to fully convert all half-day pre-K seats to full-day, but HB 3 accelerated that deadline. RISD now plans to apply for a waiver to delay full implementation until school year 2021-22.

District officials face the challenge of finding enough space to serve eligible students. They estimate they will have to double the number of available classrooms and teachers—they currently have 56 of each as well as 64 coteachers.

“Ultimately, we need more time with these kids to close that [achievement] gap,” she said.

According to the National Institute of Early Education Research, the efficacy of a longer program hinges on quality. In other words, educators must ensure curriculum is not just watered down to fill a six-hour period.

“If that is what happens, then there won’t be much in the way of gain,” said Steve Barnett, senior co-director and founder of the institute.

RISD already uses full-day curriculum that is trimmed for a half-day, so the extra time will allow teachers to strive not just for surface understanding but also depth and mastery, Branum said.

Hispanic and black children comprise nearly 70% of students enrolled in RISD. At this early stage of implementation, the district has not yet measured pre-K success in terms of race and ethnicity, but it is confident its results will be consistent with similar programs in the region and nationwide, a district spokesperson said.

Kindergarten readiness is the first domino to fall in a long line of academic milestones, including reading at grade level by third grade.

“We know what [reading on grade level by third grade] can mean for a student’s dropout rate, graduation rate and career earning potential,” Branum said.

A study by RISD found that students who attend pre-K are almost four times more likely to read on grade level by third grade than those who did not.

“I wanted him to be ready, and now he is ready,” she said.

Prior to HB 3, Texas was ranked top-10 in the nation in terms of pre-K enrollment. Barnett said this is due to the large number of qualifying students who live here.

But the state landed in the bottom 10 in terms of pre-K per-pupil state spending, according to the latest annual report from the National Institute of Early Education Research.

“Texas has been in the ‘standing still’ or ‘moving backwards’ category,” Barnett said. “[HB 3] is a big step forward.”

State funding for full-day pre-K in RISD totaled $4.5 million in Year 1, according to Chief Financial Officer David Pate. Districts are free to use the money however they see fit; RISD has chosen to invest it in staffing.

The district exceeds the state’s student-to-teacher ratio requirement of 22:1. In RISD, each pre-K class of 22 students has both a teacher and a co-teacher. Some of the co-teacher cost will be left to the district, Branum said.

“So it is not a complete break-even for us, but it has made it much easier,” she said.

It is impossible to know how many eligible pre-K students live within district boundaries, Branum said. For a rough estimate, the district looks at kindergarten enrollment, she said.

Pre-K enrollment for school year 2019-20 totaled 1,604 students. Roughly 43% of those students are enrolled in a full-day program, according to Phinney.

The majority of RISD campuses do not have space for pre-K, Phinney said. Staff has begun the process of identifying buildings for leasing or repurposing.

“We are looking at every nook and cranny to find space,” she said.

Whether the district should aim for embedding pre-K in neighborhood schools or opening centralized early childhood learning centers is one of the uncertainties surrounding implementation of full-day programming. Branum said she predicts RISD will use a blended model.

There is no debate over the value of  pre-K, which is why the district intends to eventually open the program to all children—regardless of income. This model would likely involve a tiered tuition scale for non-qualifying families, Branum said.