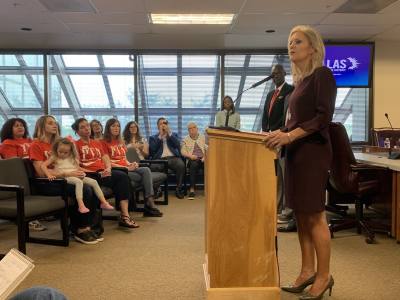 Superintendent Jeannie Stone spoke at a May 17 press conference on the Senate's changes to HB 3.

Recent changes made by the Senate to the House version of school finance reform could upend all progress made so far in resolving the issue of funding public schools, several area school districts claim.

The change affects any school district with rising property values regardless of enrollment, according to Plano ISD Chief Financial Officer Randy McDowell.

Richardson ISD Superintendent Jeannie Stone was one of several district officials who spoke at a May 17 news conference about her opposition to the bill in its current form. The change in calculations would cost RISD millions and potentially result in the elimination of 50 teachers as well as equity and college-and-career readiness programs.

"I was for the first time in my 30-year career optimistic that this would be the year we would transform education in Texas," Stone said. "This miracle happened—the money was there for the first time. All items [in the bill] will truly move the needle for students in my district and the entire state. But much of that is jeopardized if we move to current year values."

Stone described the shift as an “accounting ploy” used to benefit the state’s budget.

“They are going to give money in this hand, and then turn around and take it out of your wallet when you’re not watching,” she said.

The shift to current year values also means districts would be building “imprecise budgets” and spending funds based on values that have not been audited and certified by the state comptroller, the letter stated.

“Switching to current-year values will cause districts to be less accurate in forecasting, making the state budget process more volatile," Stone said.

The proposal was sent May 10 to a conference committee, which is tasked with resolving the differences between the House and Senate versions of the bill.

“We were promised transformational legislation that adds significant new money to our schools while providing property tax relief, and we hold out hope that there is still time for our legislators to deliver on that promise,” Plano ISD Superintendent Sara Bonser said at the conference.
SHARE THIS STORY

The funds are designated for one-time or short-term expenditures to address the ongoing impact of the pandemic, Superintendent Jeannie Stone said.

She will hold the position until the next City Council election in 2023.

The sports bar offers a nightly happy hour from 4-7 p.m.

Menu items are streamlined to allow for fast service, easy choices and low prices, according to a company release.